Auction Manager Jeremy Lee takes us through some of the highlights in our June Fine & Rare Wine Auction.

A six bottle lot of Parker 100 pointer Chateau Bellevue Mondotte 2009 was the worthy top lot in our June wine auction with a hammer price of £1050. Most definitely a ‘collector’s wine’, made in miniscule quantities with as few as 5000 bottles produced, it’s a singular, potent style, which will be undoubtedly incredibly long-lived. As will be our top single bottle lot, Chateau Lafite Rothschild 2015, which sold for £625, which barely qualifies as a toddler in First Growth terms (albeit the most sophisticated toddler imaginable!). 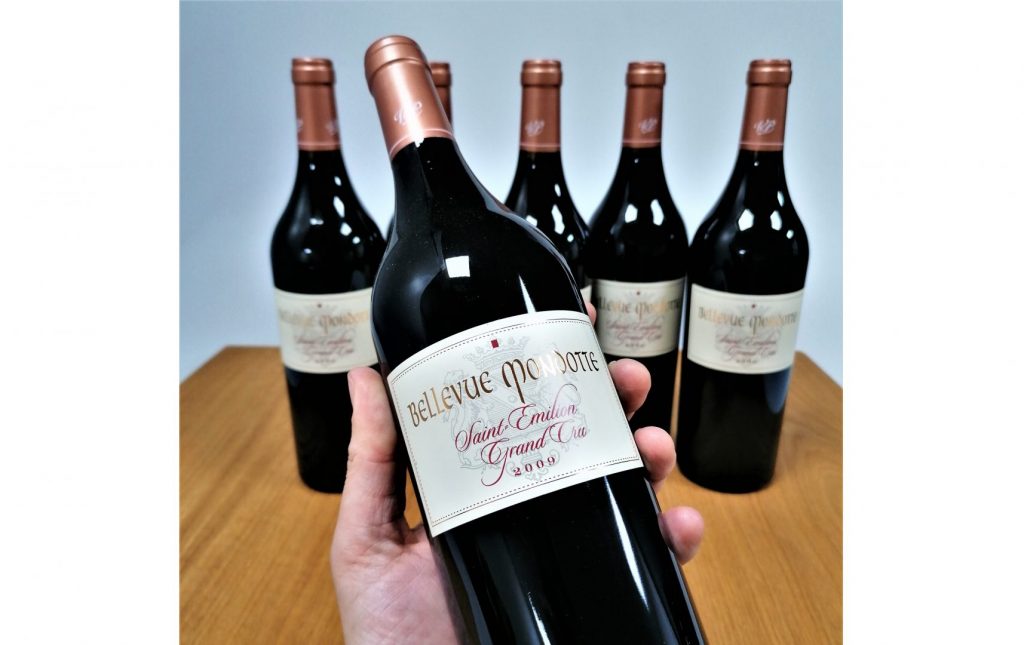 Outside of France, it was great to see plenty of interest on an eleven-bottle lot of Chateau Musar 1997, with the hammer falling at a mightily respectable £650, demonstrating the high esteem that Lebanon’s most celebrated wine hero is held, as well as reflecting its ability to age and develop.

The Rhône had a good evening, with lots from the north, produced by biodynamic superstar Michel Chapoutier from the region’s two most celebrated hillside vineyards providing highlights. Two single bottle lots of Hermitage Ermitage Le Pavillon 2008 hit £130 each, with Côte Rôtie La Mordoree 2008 achieving £180 for a trio. Our top Rhône lot, however, came from the south, and also served to prove that good things do come in small packages, with a case of eleven half bottles of Chateau de Beaucastel 2003, renowned for its use of all 13 permitted grape varieties hitting an impressive £430. 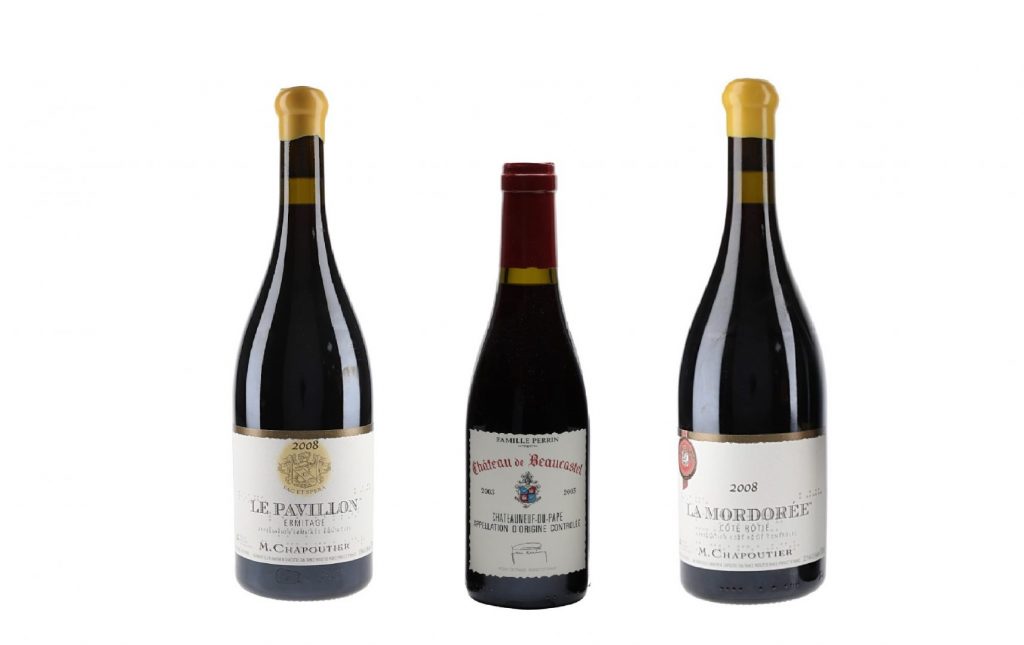 Australia’s most celebrated wine, Penfolds 2013 Grange Bin 95 was the other Wine Advocate 100-pointer (and top ‘New World’ lot) in our top ten, achieving £460, but one canny bidder picked up three bottles of Henschke Mount Edelstone 1994 for what seemed like a modest £240 by comparison. Although the labels were damaged, these were a canny buy: it’s the single-vineyard sister wine of Henschke’s Hill of Grace, which tends to come in only second to Grange when it appears at auction in terms of investment and collectability, and is very much of the same ilk. 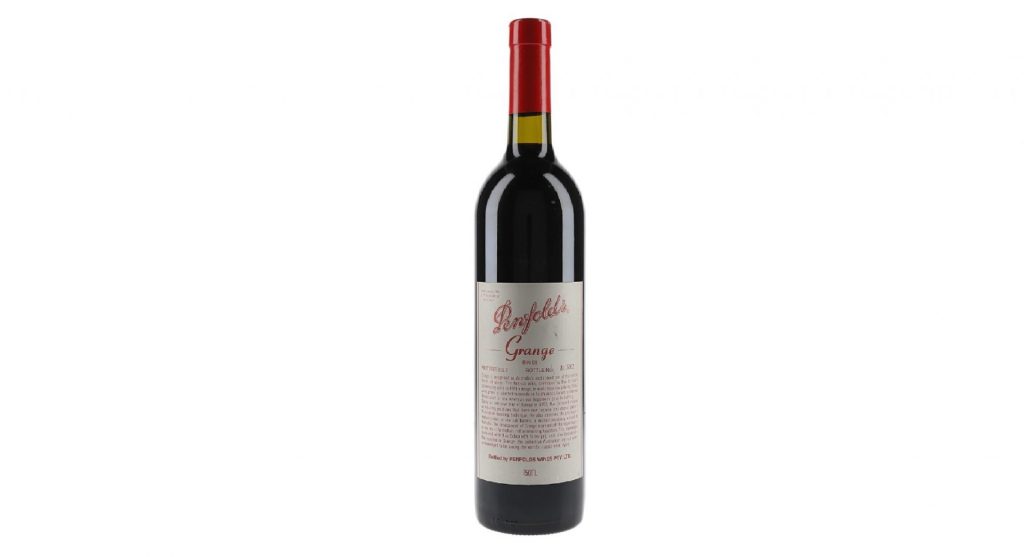 Nightclub favourite, Armand de Brignac Gold, provided us with two Champagne highlights, with the more sparkling of the two lots (in a presentational sense at least) fetching £360. Dom Pérignon, as is often the case, provided collectors with multiple vintages to compete for, with the Dom Pérignon 1964 hitting £410, interestingly going for over twice the hammer price of some of the young pretender vintages, with Dom Pérignon 1985 fetching £220, Dom Pérignon 2002 going for £200, & the Dom Pérignon 1995 achieving £190. These were all excellent, mature DP vintages, but it just goes to show that bidders are prepared to stump up for truly historic vintages when they come up. 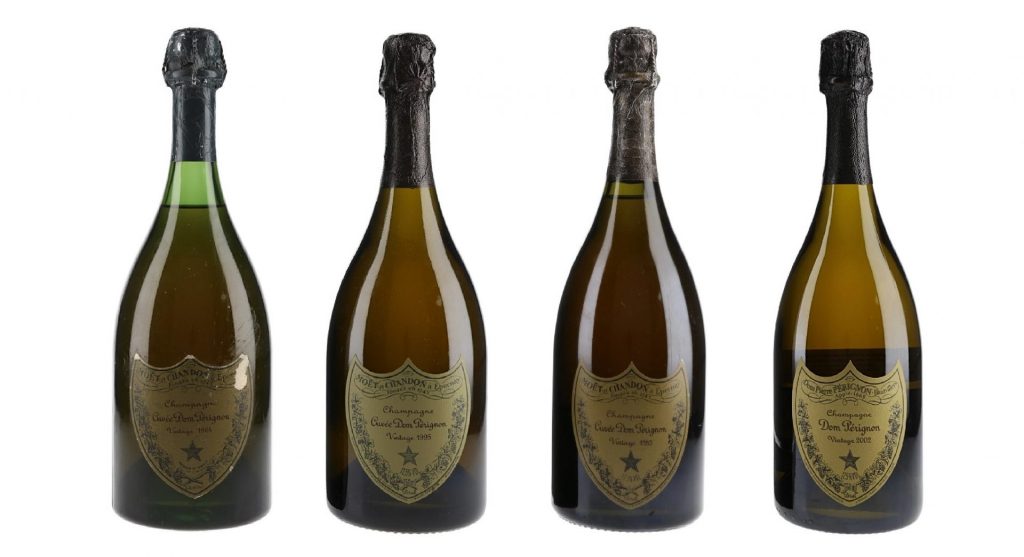