When we’re searching for something ‘authentic’ the difference between whisky from Japan and Japanese Whisky is important and we’ll be watching closely to see how prices develop as the whisky industry in Japan increases its efforts to be more transparent. While much attention this June was on the Yamazaki 25 Year Old Limited Editions which sold for £6200, it is perhaps more revealing to track the recent price history of the lesser limited (if not particularly unlimited) Yamazaki 25 Year Old.

Yamazaki 25 Year Old is an exceptionally attractive whisky. It is deeply sherried, rich and has a winning combination of thick, sweet and spicy fruity characteristics. It is a style that never seems to go out of fashion. 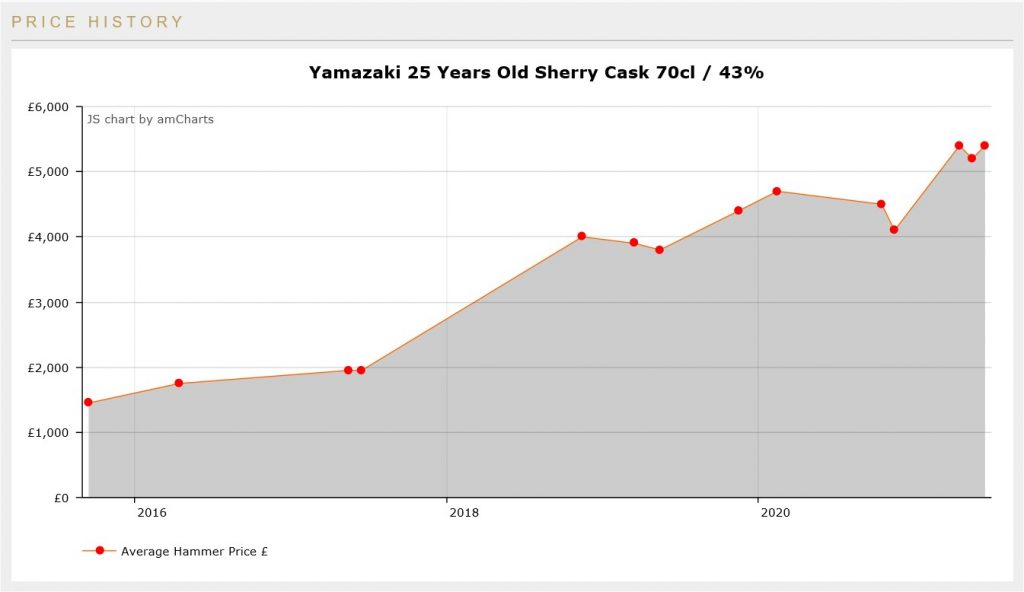 We don’t often talk about vodka on these pages and when a vodka sells for £1000 it’s probably going to be an egg shaped Faberge style Russian Art’s Applied Craft Vodka and it’s probably worth a mention. TOP TIP: Vodka rarely reaches the four figure sums achieved by aged spirits so vintage cocktail enthusiasts can often pick up vodka from the 1950s for the price of a generic supermarket own-brand bottle.

The Irish Whiskey renaissance has taken the number of working distilleries in Ireland from a melancholy four in 2013 to at least 18 active distilleries today. Naturally, with so much more interest enthusiasts are turning to Ireland’s historic output of whiskey for inspiration and we’re beginning to see more global demand for Ireland’s lost distilleries too.

If you’re not sure where to start then look out for super collectable Midleton Very Rare annual releases which are flying at the moment. Meanwhile if you’re on a tight budget (and in no hurry to get rich either) search for an ‘old presentation’ editions of current favourites which can be picked up for a song well before they become history.