As we head towards Christmas the December auction brought plenty of much needed cheer alongside some intense bidding, not only on the exceptional Johnnie Walker 1805 Celebration, but also on Japanese Whisky lots from Karuizawa, Suntory’s Yamazaki and Hakushu distilleries. We also sold two of the oldest bottles ever brought to auction: a pair of 19th century cherry brandies, as well as a special bottle number 1 of Arran surpassing expectations with all proceeds going to charity. 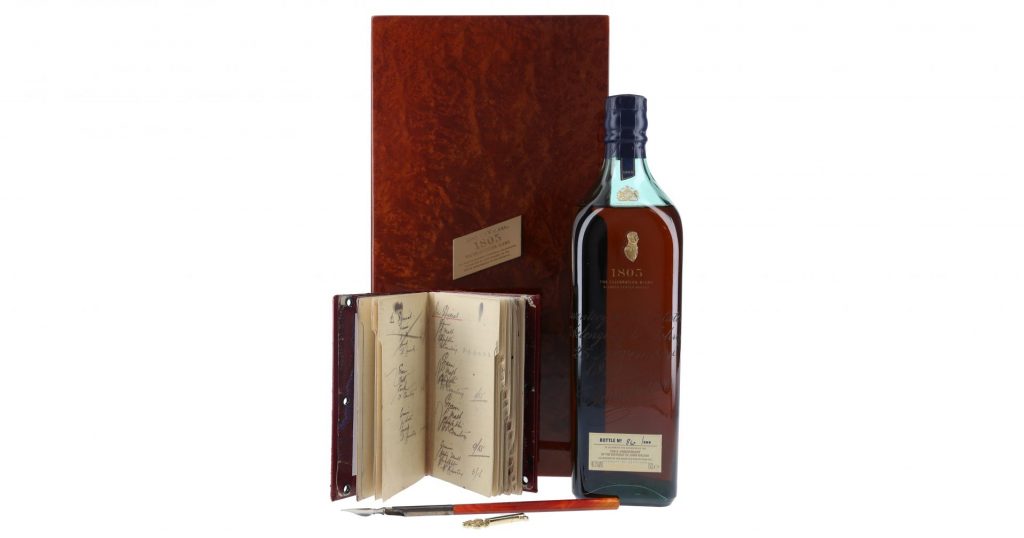 This special edition was created in 2005 to commemorate the 200th anniversary of the birth of John Walker. A blend of whiskies aged from 45 to 75 years and bottled at cask strength, the bottle is beautifully presented in a lockable wooden case and comes with an ornate quill and a replica of Alexander Walker’s recipe book, detailing the ingredients of some of Johnnie Walker’s most famous blends. Not only was this rare on release (only 200 bottles were produced), it was never released for general sale but instead was presented to those who the company consider to have made ‘a significant contribution to modern life’. Winning Bid £11000 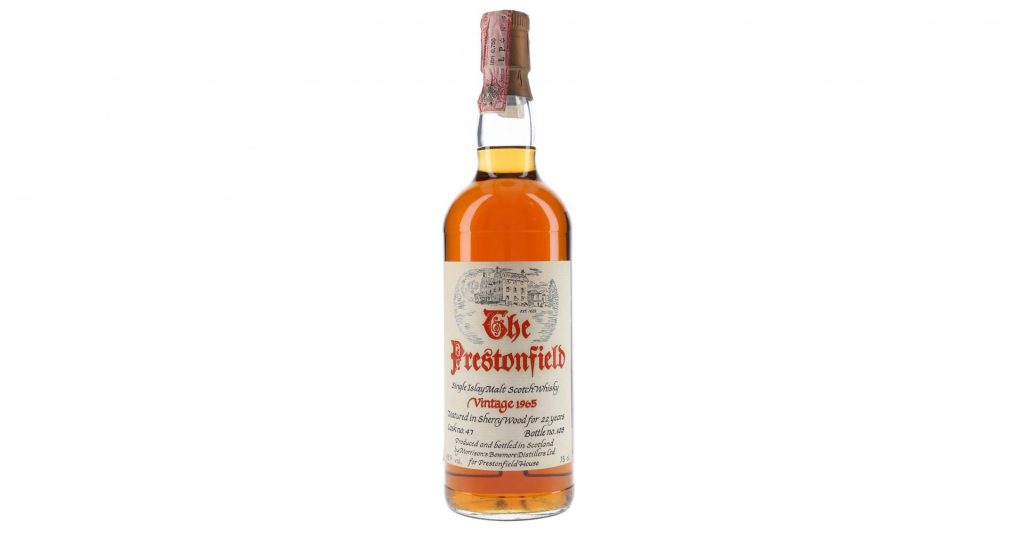 This Bowmore 1965 22 Year Old was bottled for Prestonfield House, a five star boutique hotel in Edinburgh. Andrew Symington, Assistant Manager at the time, later went on to found Signatory Vintage. This was matured in a single sherry cask for 22 years before bottling at 43% ABV by Morrison’s Bowmore Distillers Ltd. and has gone on to become one of the most sought-after expressions of Bowmore from this era. 94 points, Serge Valentin, WhiskyFun. Winning Bid £6000 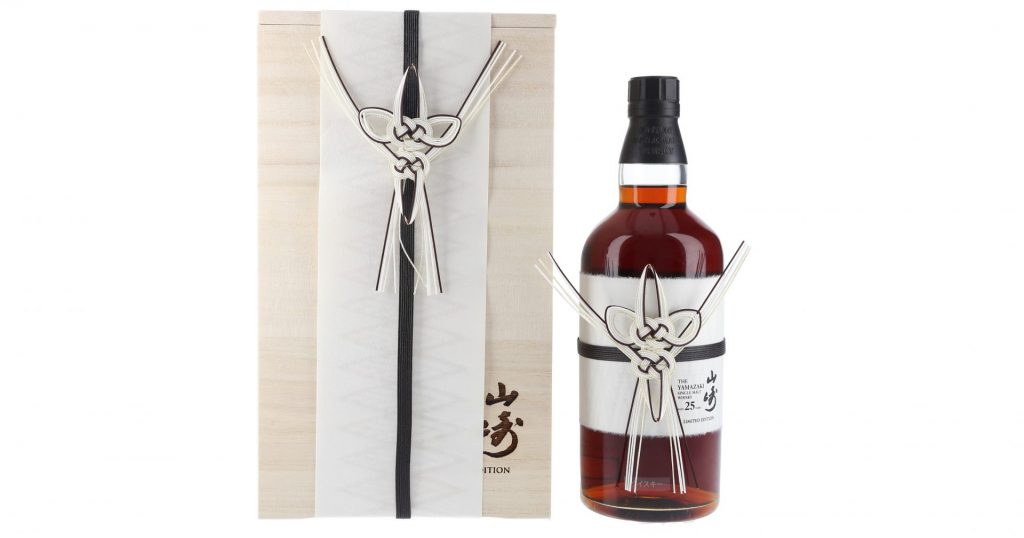 The already popular sherry matured Yamazaki 25 Year Old was given a special makeover for this limited edition. The bottle comes in a Paulowina wood case and the label is made of traditional Washi paper. The box itself is sealed with a five-cord ‘Mizuhiki’ which symbolizes the hands and heart of the giver and recipient of a gift, a traditional emblem of Japanese hospitality. Wining Bid £5000 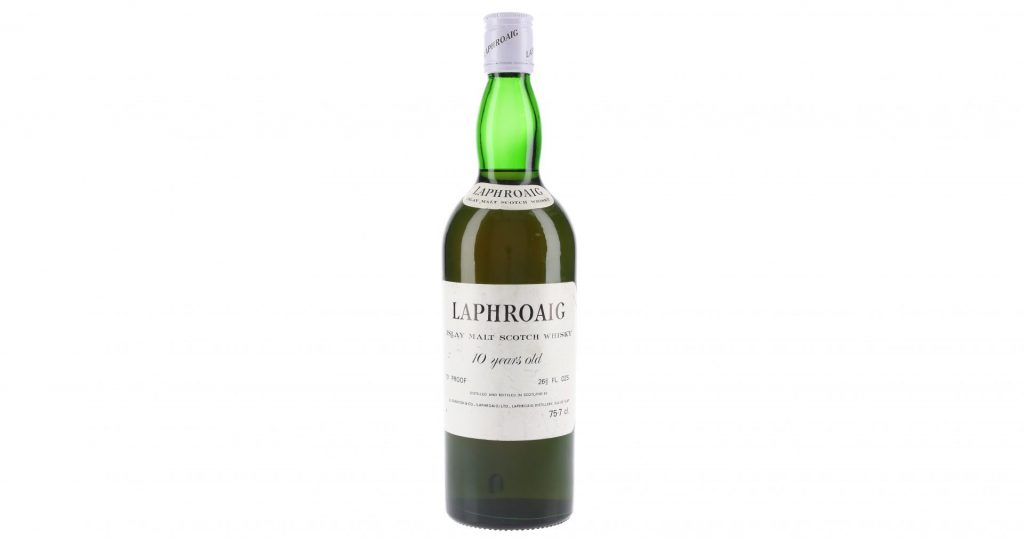 We’ve seen ever increasing demand for old Laphroaig and this expression, bottled for the UK market in the 1970s, was always going to be popular, particularly given its excellent condition. A bidding war in the closing stages took this bottle well over the £3000 mark. The previous time we sold this bottle in October 2019 it sold for £2200. This edition was awarded 96 points by Serge Valentin of WhiskyFun. Winning Bid £3500 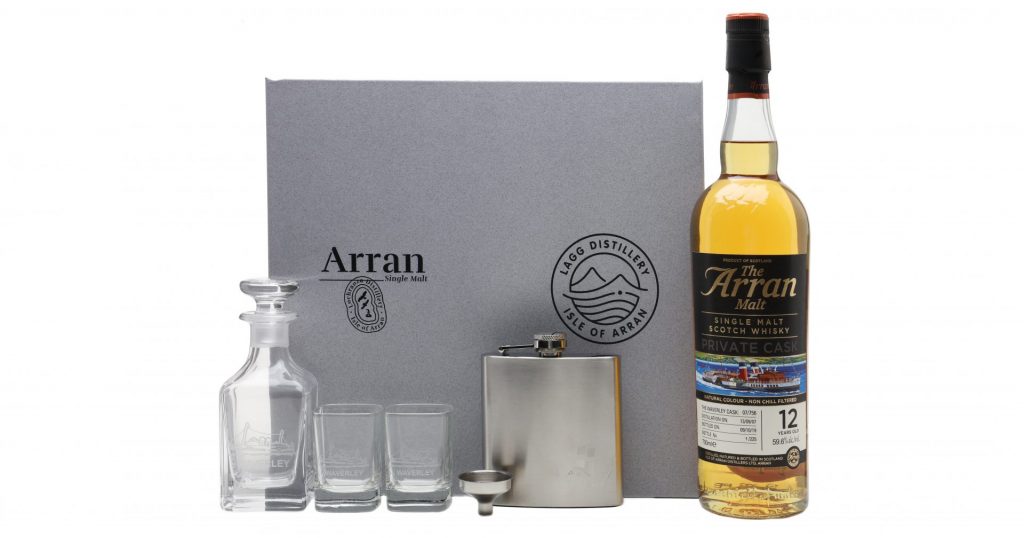 This special edition was released as a distillery exclusive to raise money for the Waverley Boiler Repair Appeal. Arran tour guide Campbell Laing, who had come up with the idea to raise the money in the first place, decided to go one step further and auction his own bottle number 1 to raise even more money. The bottle had been bought by his colleagues as a gift to him and we are delighted by the amount the bottle raised for this charity. Winning Bid £2100 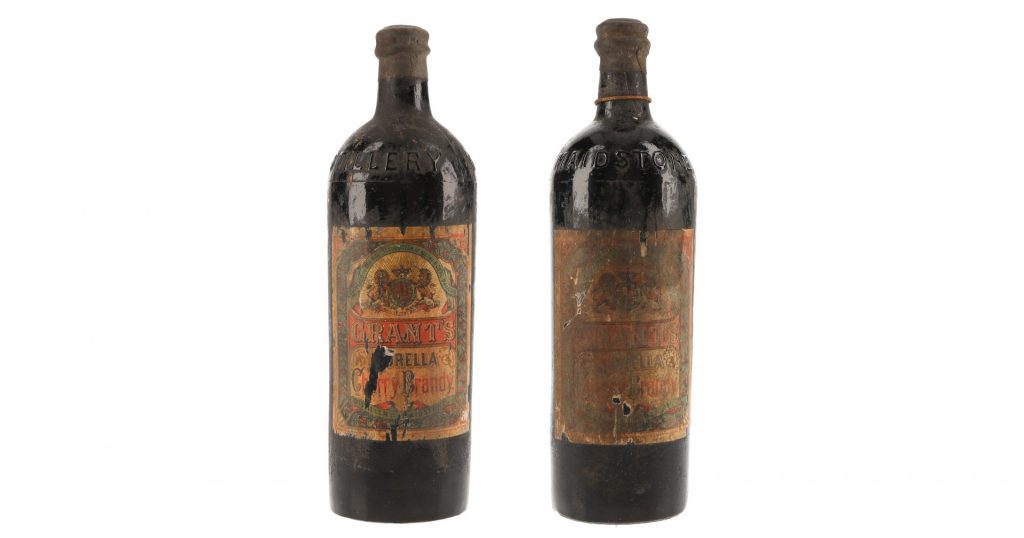 December saw us bring two very old bottles of Grant’s Morella Cherry Brandy to auction. Produced at Maidstone Distillery in Kent, we estimate these were bottled in the 1860s to 1880s. The heavyweight bottles were constructed using a three-part mould which is embossed on the shoulder with ‘Maidstone Distillery’. Sealed with a driven corks covered by a metal capsule, the maker’s mark on the base reads ‘ P & R / B’, which stands for ‘Powell & Rickets, Bristol’. This maker’s mark was used between 1857 and the late 1880s. Some fierce late bidding resulted in these bottles shooting up in price in the final stages. Winning Bids £1000 & £925