A new city and a new venue for this year’s Old & Rare show, where aficionados, fans, collectors and drinkers alike will descend on London from across the globe for the chance to taste once in a lifetime drams and seldom seen bottlings.

The new venue for 2020 at One Great George Street in Westminster is rather impressive and should be a more than adequate replacement for Glasgow’s Grand Central Hotel. With a host of new exhibitors alongside some more familiar faces and almost 600 old & rare whiskies on show, this one’s sure to be a cracker.

At Whisky.Auction, we have curated a list which we feel has something special for everyone. We’ll be pouring a spectacular selection of aged single malts from across Scotland and further afield, plus an impressive lineup of amazing old blended whiskies, which showcase the production techniques and characteristics of a bygone era. 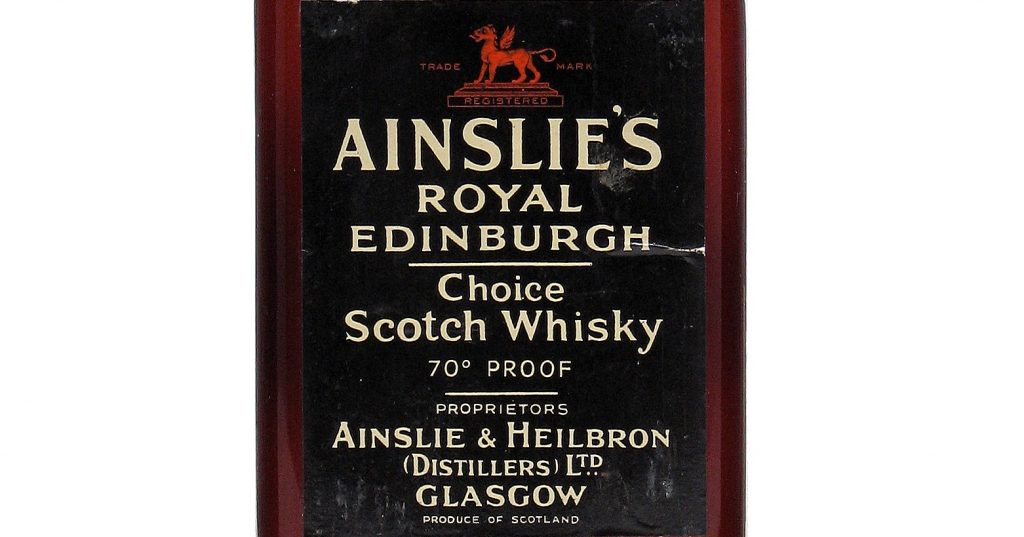 Ainslie & Heilbron Distillers Ltd. can trace its roots back to 1868, beginning as wine & spirit merchants before branching into distilling. It took over the old Clynelish Distillery in 1896, completing a full rebuild in 1898 before becoming part of the DCL empire in 1926. The Ainslie’s Royal Edinburgh blend enjoyed considerable success in export markets, namely Belgium and Australia.

The first thing that really becomes apparent when tasting this whisky is the weight of the liquid. Even on the nose, you get a sense of the richness, with wafts of oily and waxy fruit peel erupting from the glass. In the mouth, a glorious viscosity is backed up by more oily and fatty notes alongside some more vegetal, savoury characteristics and a hint of coal smoke. A little minerality and citrus appear on the long finish but it’s all about the mouthfeel here. Clynelish/Brora fans get in the queue…a real beauty. 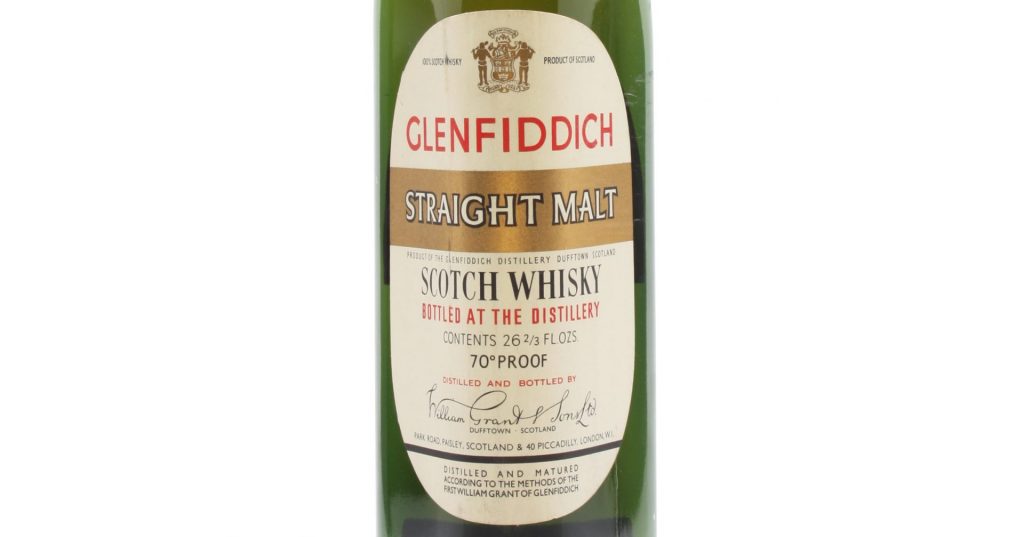 The fact that Glenfiddich has continued to be a powerhouse throughout the years, ever avoiding the doom which has beset the industry at certain points in history is down to a number of reasons, but namely because it’s a damn good malt. The Glenfiddich of the middle of the 20th century is vastly different from the liquid produced today.

This Glenfiddich Straight Malt dates from the 1960s, when single malt was only just becoming widely available in any sort of quantity. Oily and rather sooty on the nose, this has some funk to it and there’s a definite sense that this one has spent some time in the bottle. It’s nutty and waxy in the mouth, with a little restrained fruit lingering in the back. The finish isn’t the longest, but it’s an intriguing one and you can really get to grips with the bottle age and time spent in glass. A little crackerjack which gives a window into what was a great time for Scotch whisky making. 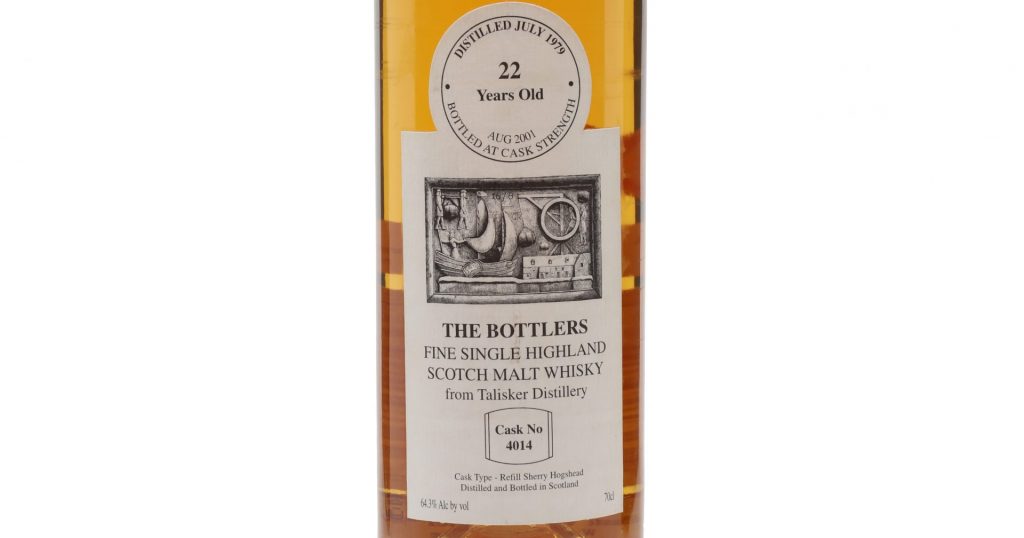 The Bottlers was formed in 1993 but it’s history goes a little further back than this. Starting life as a florist, owner Zubair Mohamed, a wine man by trade, pushed the business forward under the guise of Raeburn Fine Wines. Due to a good friendship with some prominent figures in the whisky world, The Bottlers managed to get its hands on some absolutely fantastic casks, including a parcel of casks from Diageo in the early 2000s.

This Talisker 1979 is one of those. Bottled in 2001 at cask strength from a refill sherry hogshead, this really hits the spot. On the nose, you get that fiery salinity which Talisker so often gives you…citrus too alongside stewed fruits from the refill sherry. On the palate, this is chewy, rich and downright delectable. The finish lingers with more wafts of tangy fruit – a fantastic distillate in a fantastic cask, what more can you ask for? 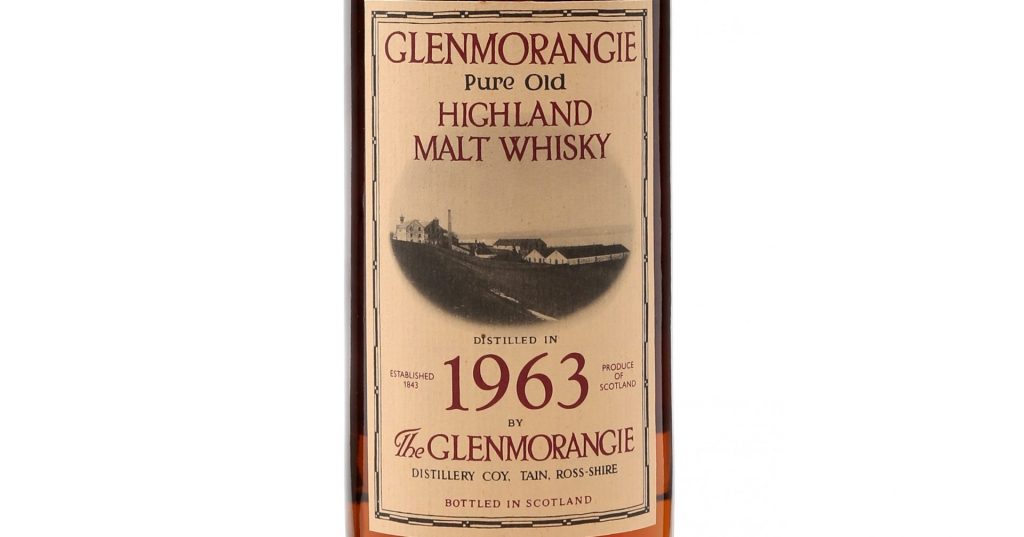 ‘Finishing’ has been around in the whisky industry for ever, but it was Glenmorangie who first marketed it as something special in the 1980s. This 1963 vintage was one of the pioneering bottles, matured for 22 years in ex-bourbon casks before a one year ‘finish’ in Spanish oloroso casks.

This is a truly outstanding whisky. Lovely oak and spices with some dried fruit in there for good measure. The complexity in the mouth is there in abundance, as is that hint of sherry from its year in oloroso…but its just a hint…and it works beautifully. More fruits and spice follow and they integrate seamlessly. It’s an excellent and highly-complex dram that led to many more excellent ‘finished’ whiskies in the years that followed. 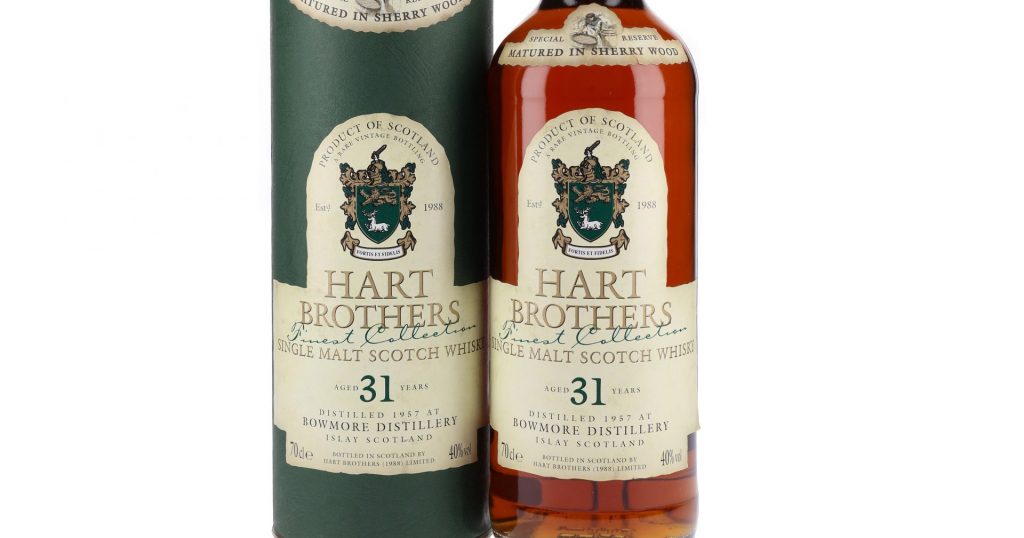 Although Hart Brothers can trace its history all the way back to the early 19th Century, it wasn’t until 1964 that brothers Donald & Iain Hart moved into the wine and spirit industry as Scotch whisky blenders. Hart Brothers has bottled some magnificent casks over the years and this Bowmore 1957 is certainly one of them.

Compared to the tropical fruit bombs that came out of Bowmore in the 1960s, this 1957 is a little more restrained and elegant. Matured for 31 years in sherry wood, the nose is a sensational mix of dried fruits, nuttiness and a gentle but delightful hint of those fresh tropical fruits for which Bowmore has become legendary. To be honest, the aroma is that good that I’d quite happily sit and nose this for hours. It still feels quite fresh given the age and this continues on the palate, with more fruit and some chocolate and leather notes. This is all wrapped perfectly around a lump of peat which gives the whisky a wonderful wafting smokiness, acidity and a finish that feels like it goes on forever.

For the full list of bottles we’ll be taking to the show, visit to the Old & Rare Whisky Show website… and remember to pop by to say hello, there may be some mystery bottles on the stand too!