As the year draws to a close we wanted to revisit some of the lots that grabbed our attention in 2021. 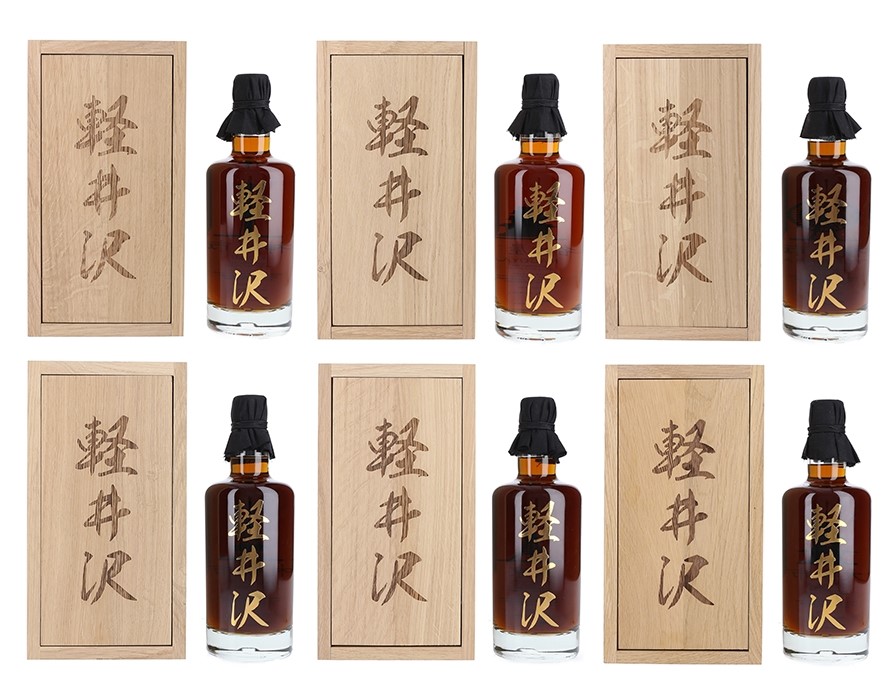 Let’s start with this set of six Karuizawa.

Each bottle represents one of Japan’s great cities, Kobe, Nagoya, Osaka, Sapporo, Tokyo and Yokohama.
Just 20 full sets were filled, all from cask #4051.
The whisky was distilled on 5 October 1981, matured in a single sherry cask and bottled at 59.1% ABV on 18 April 2017 for Polish company Wealth Solutions. This was the first time a full set had ever been offered at auction.
Karuizawa Cities sold in our January 2021 auction for £44500. 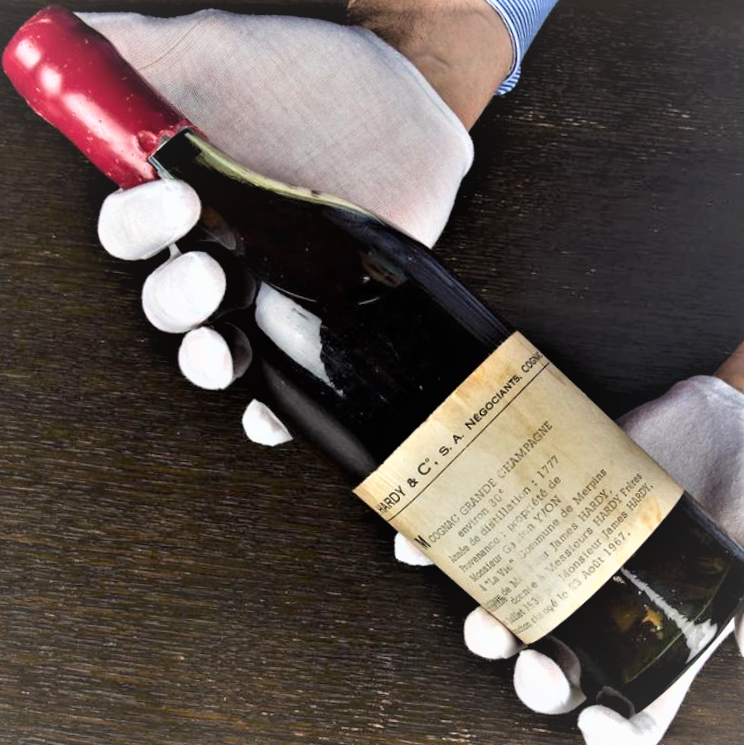 Hardy 1777 Grande Champagne Cognac was by far the oldest spirit we’ve ever brought to auction. The hammer fell at £40500 when it was sold in our February 2021 auction.
This was one of five extremely rare bottlings from 1777, 1802, 1812, 1906 and 1914 sourced from the private collection of the late Jacques Hardy, part of the famous Cognac-producing Hardy family in France.
Each bottle came with a certificate of authenticity from the hand of Monsieur Hardy himself and were sold on behalf of a private collector who purchased them directly from Jacques in around 2003. 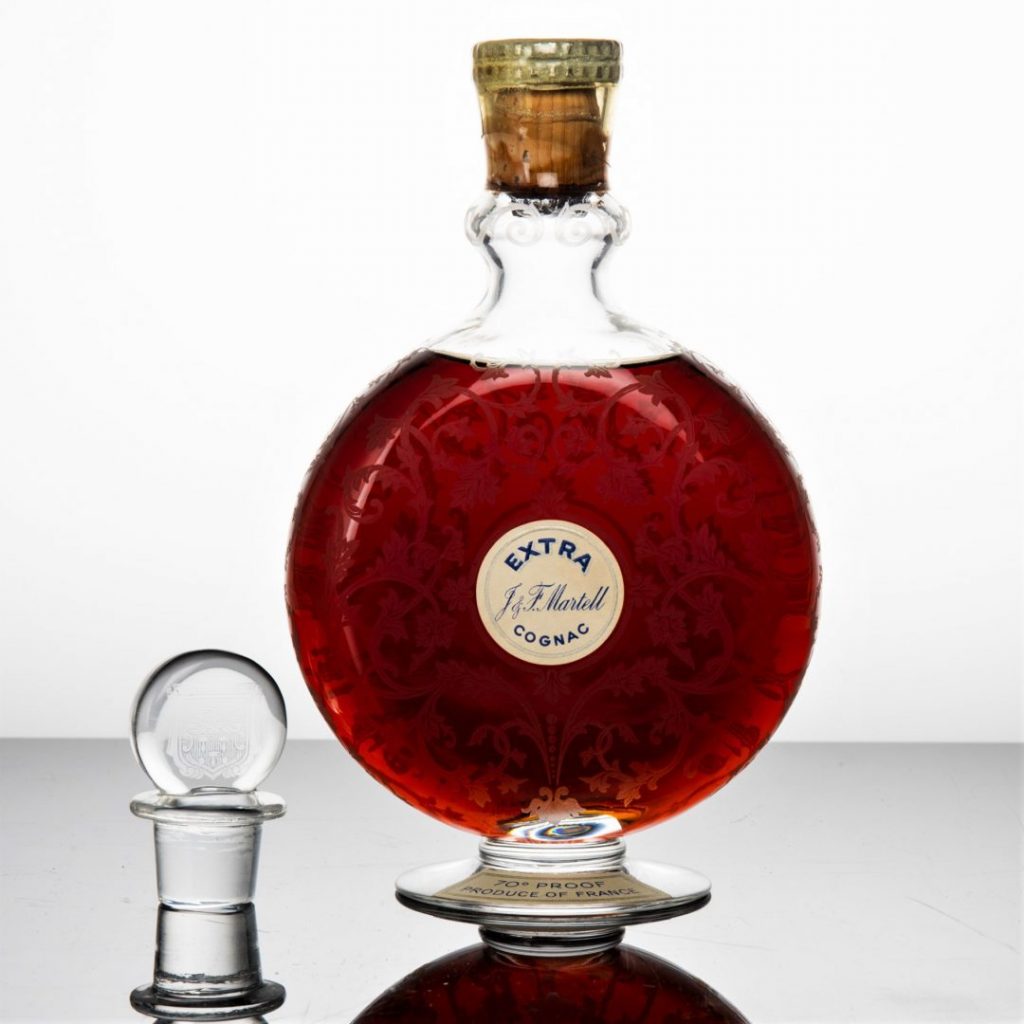 This Martell Extra Cognac was our highlight in March and after some tense late bidding finished up at £42500.
Presented in a beautifully engraved Baccarat Michelangelo crystal decanter, this ‘Extra’ Cognac is one of Martell’s oldest expressions and contains truly ancient eau-de-vie. This special decanter was bottled in the early 1950s. 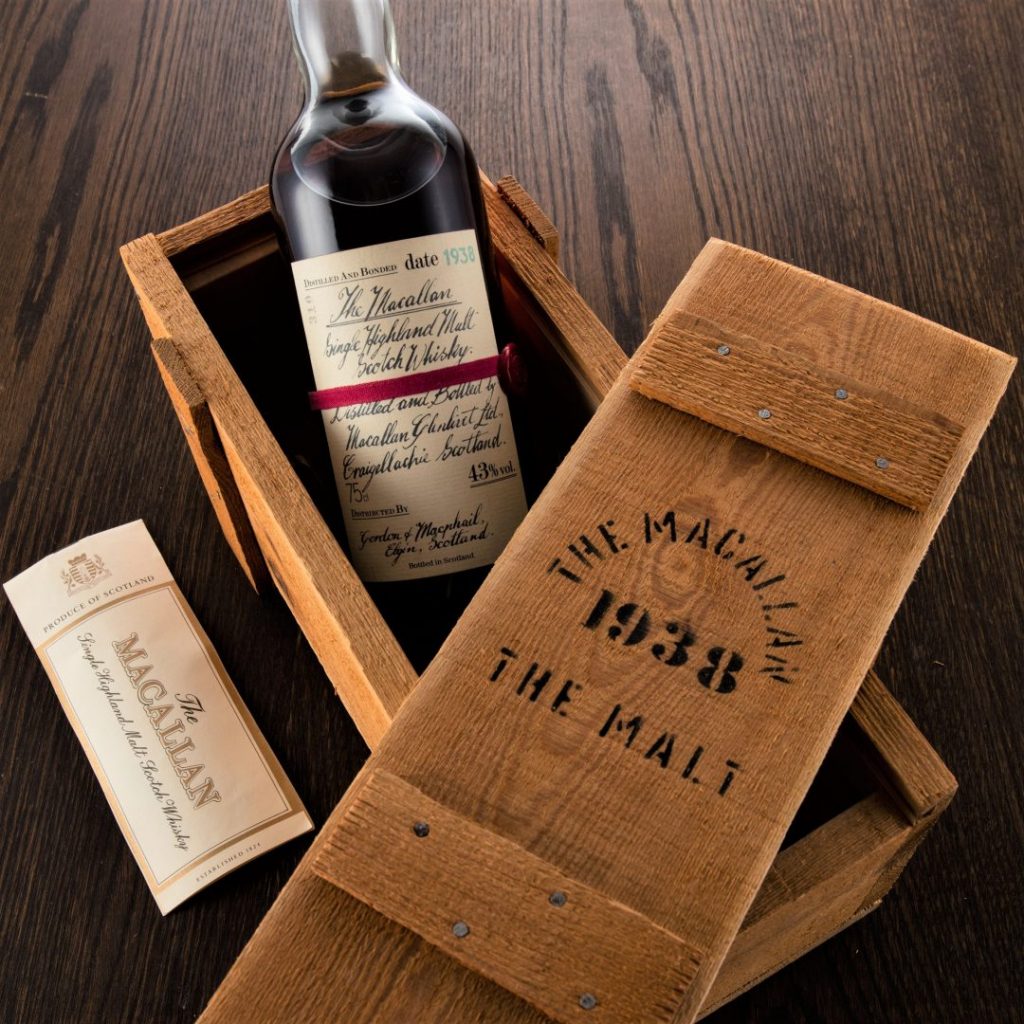 Macallan 1938 Handwritten Label was the star lot back in April 2021. The fill level wasn’t perfect but the condition of the label and box was exceptional, helping this bottle achieve an £8000 hammer price.
Distilled in 1938, this is pre-war malt from the world’s most collectible distillery, bottled at over 40 years old by one of whisky’s most reputable bottlers, Gordon & MacPhail. 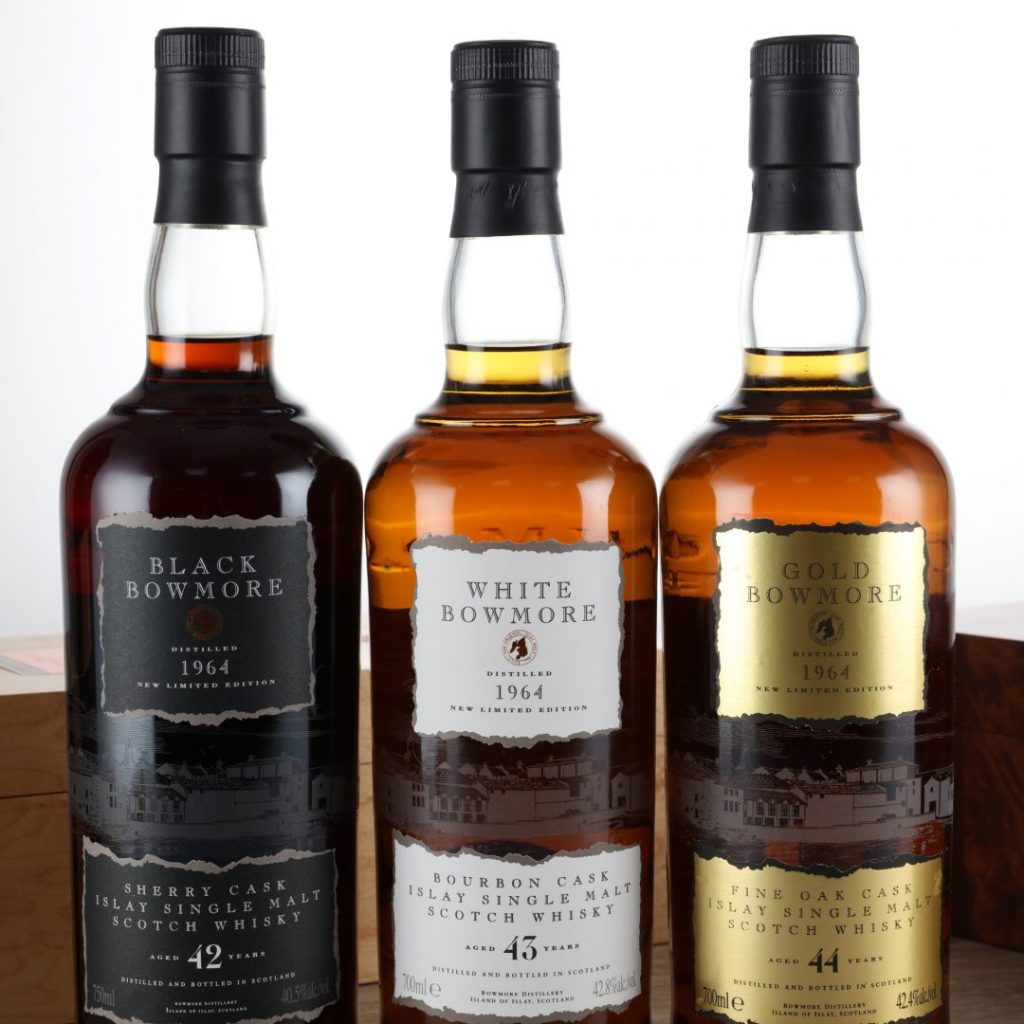 The complete Bowmore Trilogy went up for sale in May 2021 and the 44 Year Old Gold Bowmore expression came out on top with a hammer price of £16200.
Distilled in 1964, this is a vatting of three bourbon casks and one oloroso sherry cask, bottled in 2009. This expression is the last in the Trilogy series and was bottled 14 years after the ‘Final Edition’ of Black Bowmore was released in 1995. The Trilogy is completed with a 42 Year Old Black Bowmore released in 2007 and a 43 Year Old White Bowmore released in 2008. 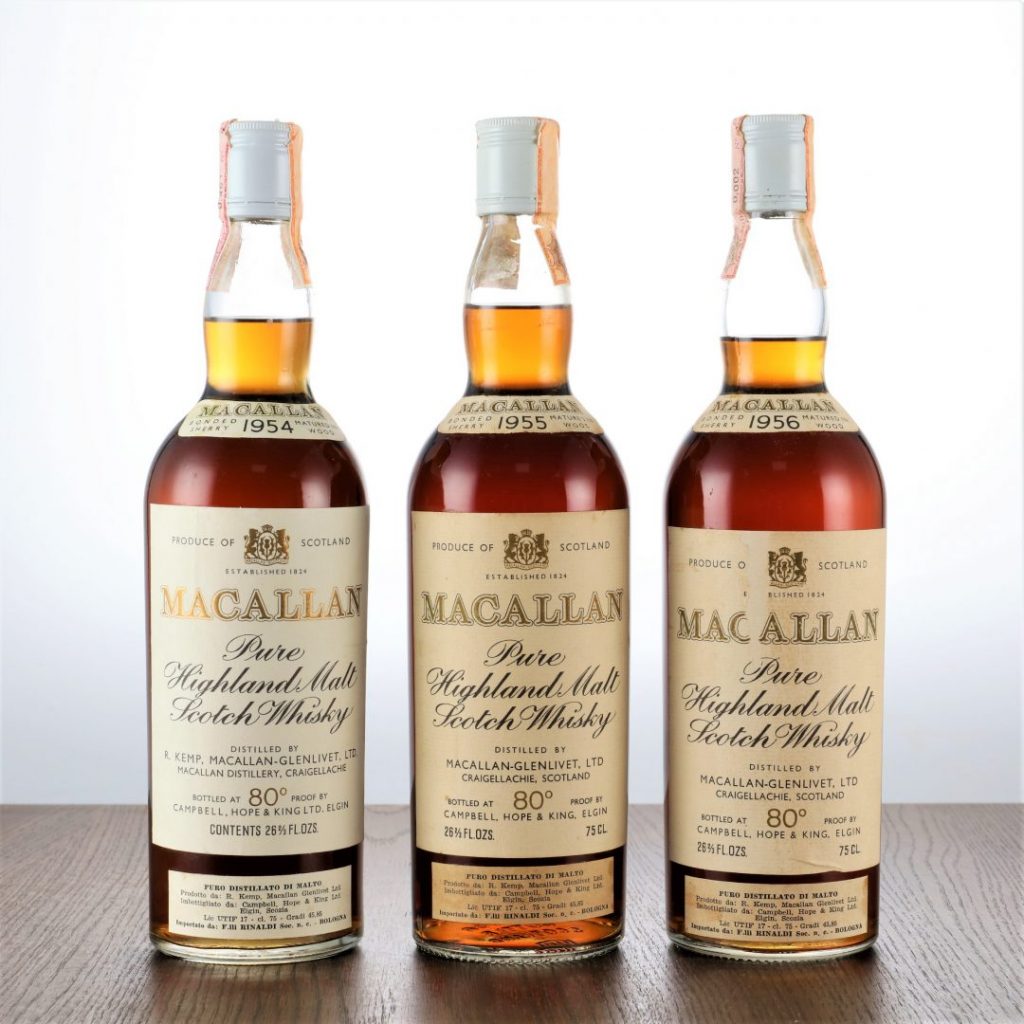 Three vintage Macallans, all from a single consignment, all in exceptional condition, were our joint star lots of June 2021. The Macallan distilled in 1954 was the pick of the bunch, and finished up at £5000. It goes to show how the condition of a bottle can impact the hammer price: it went for £££ more than usual because it was pristine. 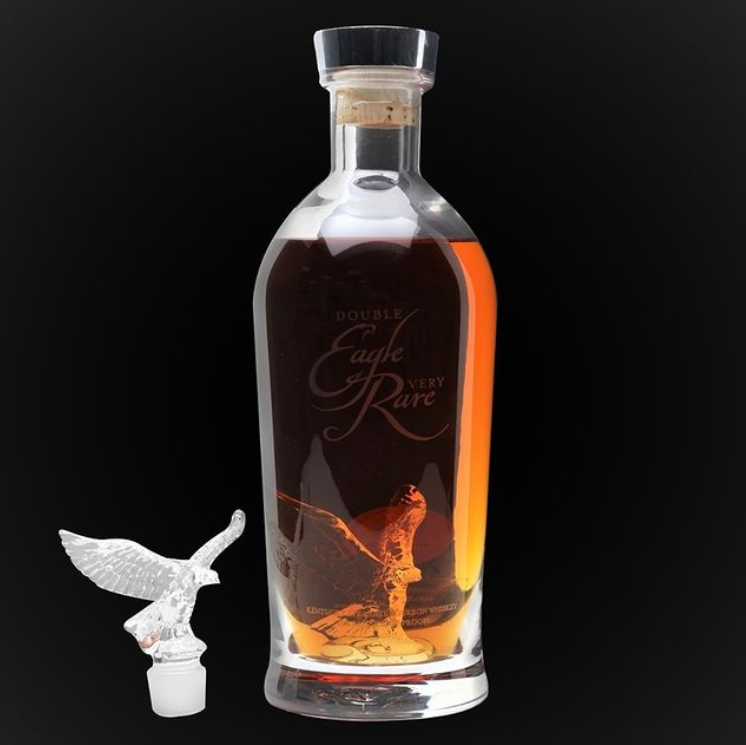 Double Eagle Very Rare was our star lot of July 2021 – the hammer finally fell at £6600.
From the Buffalo Trace distillery, this 20 year old expression was matured twice as long as usual. As the name suggests, this Double Eagle decanter features not one but two crystal glass eagles, one as a stopper and one immersed in the golden liquid…both glorified by the light-up presentation case. 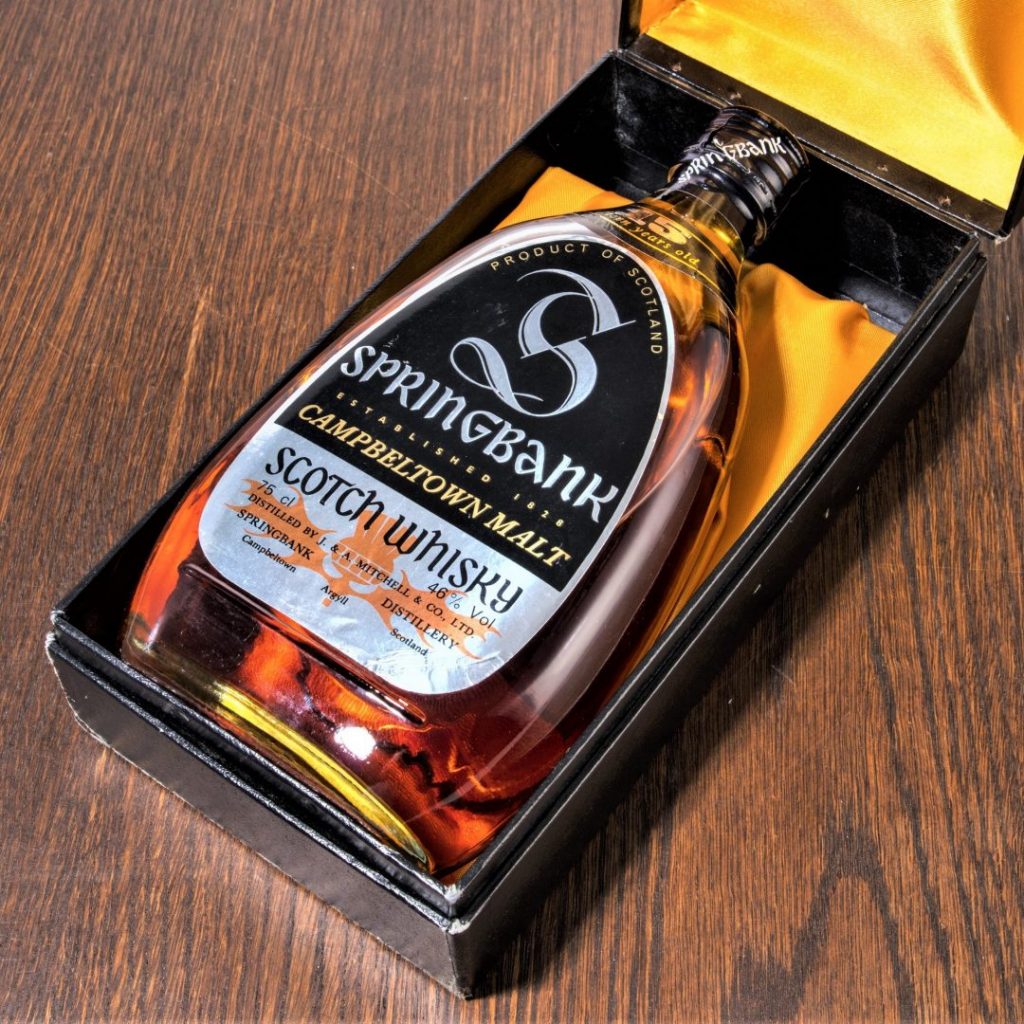 We’ve chosen a beautiful old Springbank as our star lot of August 2021. It was by no means the most expensive bottle that auction but this rare pear-shaped 15 Year Old expression from the 1970s had so much interest we couldn’t miss it off our list.
It is a traditional Campbeltown malt distilled in an era when the whisky industry in the area had taken a beating. From more than 30 distilleries operating at the start of the 20th century, just Springbank and Glen Scotia remained by the 1960s.
This superb whisky sold in our August 2021 auction for £950. 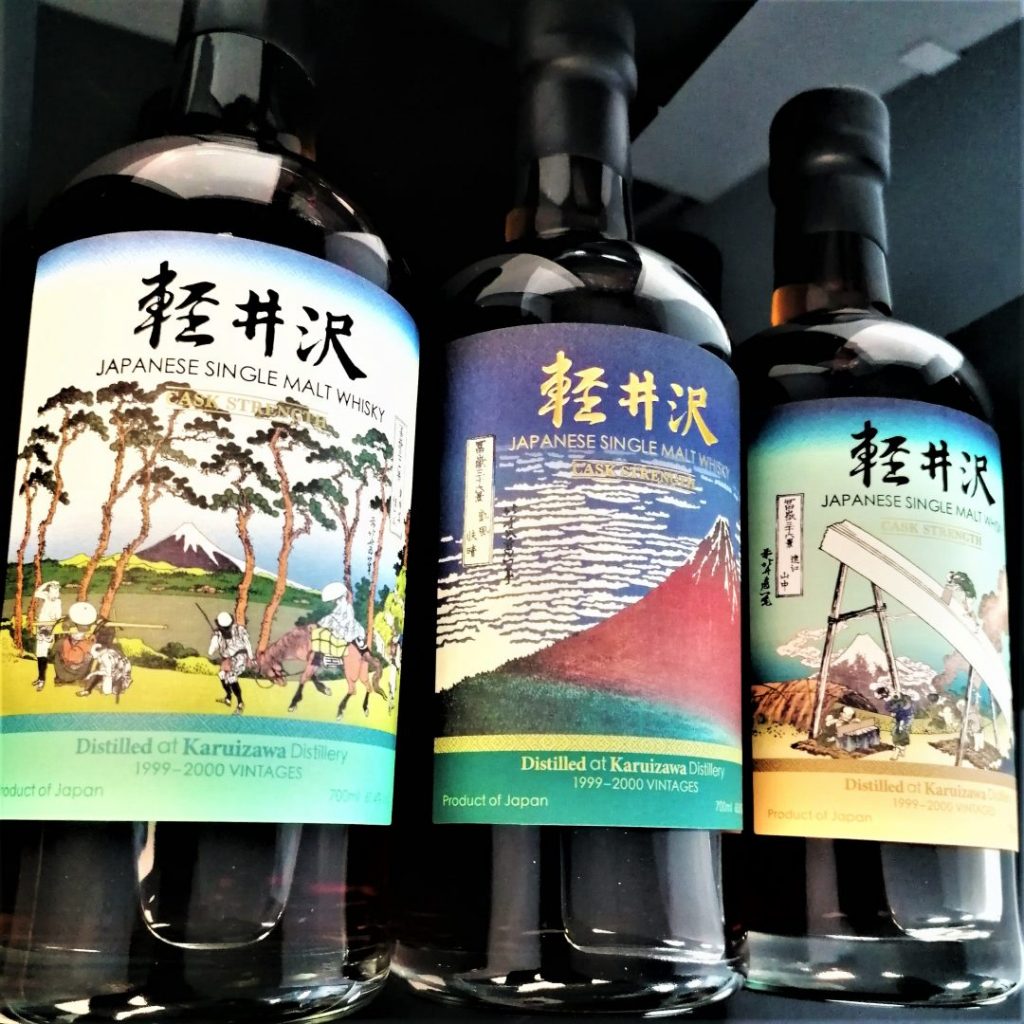 The 36 Views of Mount Fuji series distilled at Karuizawa ticks all the boxes for a dedicated whisky collector: there’s a finite number of releases from a long-lost distillery, the labels are beautiful and the whisky is cask strength.
Hokasai’s evocative images add another layer of mystique to the legend of Karuizawa, a distillery whose whisky only garnered critical praise long after it closed in 2000.
In our September auction, Batch 29 – Fuji View Field in Owari Province, sold for £2100. 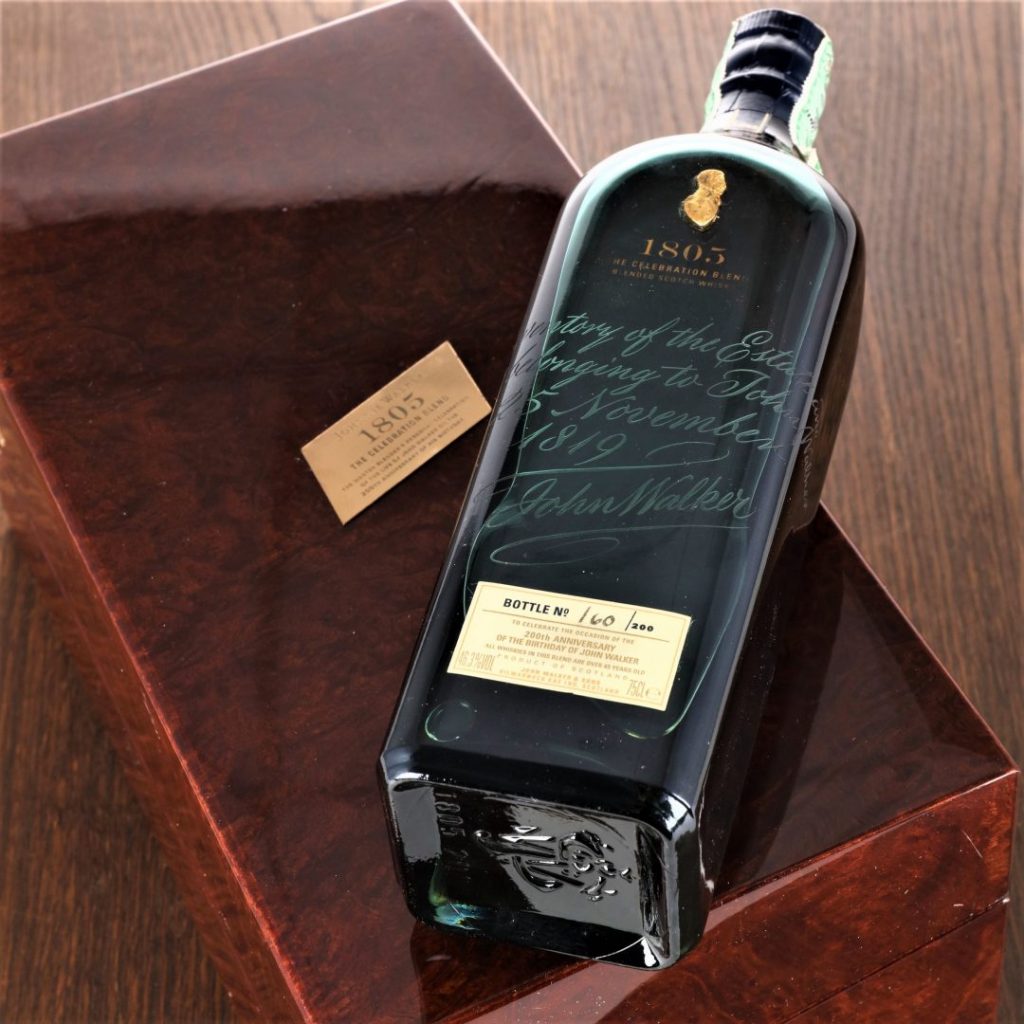 One of the star lots in our October 2021 auction was this Johnnie Walker 1805 Celebration Blend – hammer price £12,200.
We feature Johnnie Walker in each and every auction – it’s been popular for so long that there’ll be a bottle of two in most consignments. Though most aren’t as rare as this one.
Just 200 bottles were released in 2005, the 200th anniversary of John Walker’s birth. Made with whiskies aged from 45 to 75 years and bottled at cask strength, this exclusive blend was not released for general sale, instead being presented to those who the company consider to have made ‘a significant contribution to modern life’. 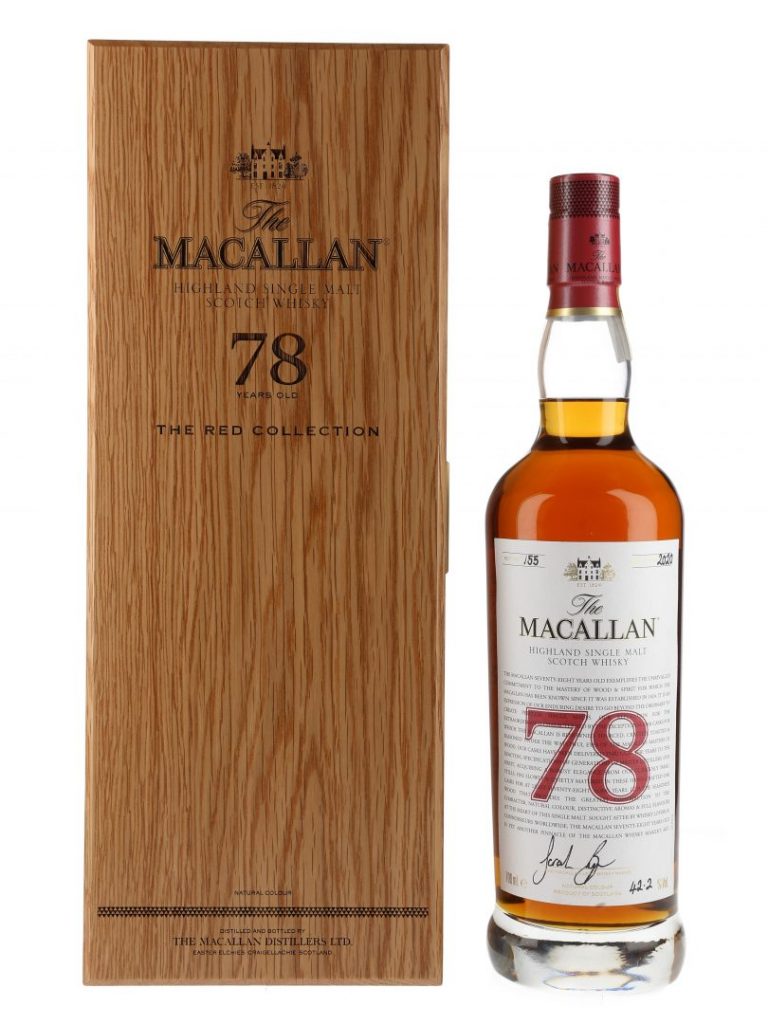 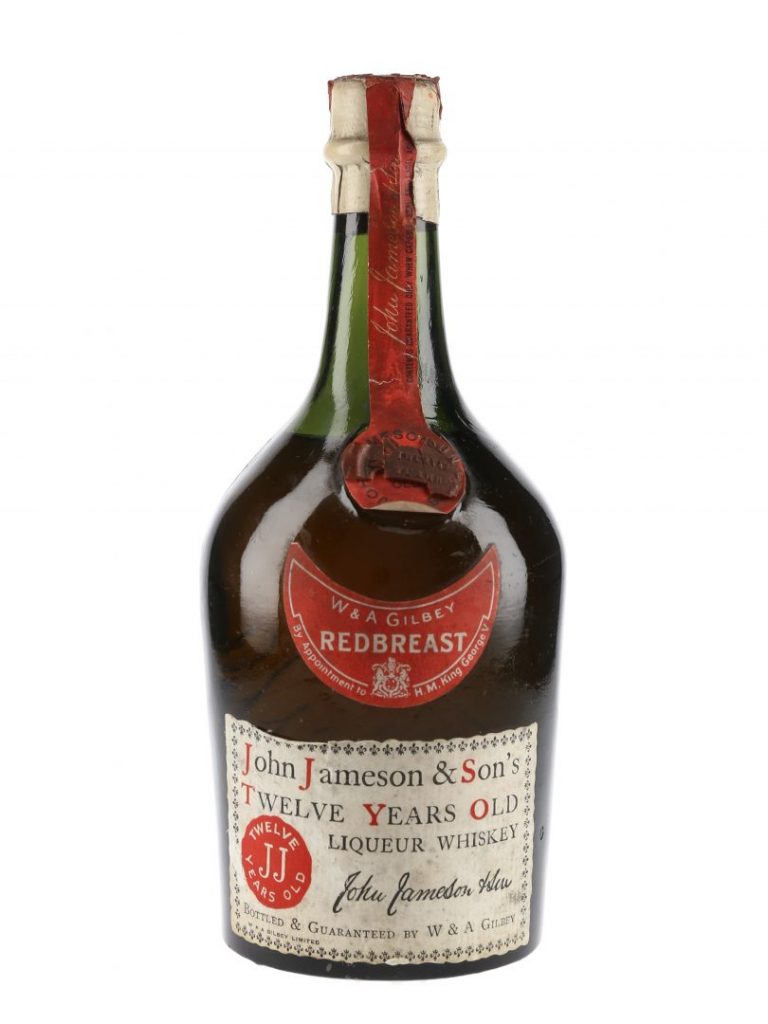 Finishing up the year was this incredible old Redbreast 12 Year Old from the 1930s, which sold in our December auction for £19000.

If you look closely you’ll notice that this Redbreast includes two names: John Jameson & Sons and also W & A Gilbey on the label, so what’s the story?
Since the late 1800s, Gilbey’s (a well known sherry importer) had supplied casks and bonding facilities for Jameson, and at one time held 0.7 million gallons of maturing Jameson stock in its warehouses.
So this bottle contains spirit distilled by Jameson & Sons which has been matured and bottled by W & A Gilbey.
By 1912 the Gilbey was advertising ‘Redbreast J.J. Liqueur Whiskey 12 Year Old’. The name was chosen by Gilbey’s chairman who was a keen ornithologist, in honour of the Robin Redbreast.

The bottle has a great story too.