Eleven bottles of Lemon Hart & Sons Royal Navy Demerara Rum bottled circa 1940s are up for auction. Bottles of this age and condition scarcely come to auction and the demand for old rum is high.

Wine critic and collector Charles Metcalfe came to us when he started looking in seldom visited corners of his cellar and discovered he’d inherited a parcel of Lemon Hart rum circa 1940s. His father, on his return from a prisoner of war camp, had worked for Lemon Hart & Sons between 1946 and 1948 and he’d kept these as a souvenir of this time.

Charles Metcalfe said ‘Since my father died and I inherited these bottles, they have been stored upright in my wine store.’

It wasn’t until Metcalfe was packing the eleven bottles of Royal Navy Demerara Rum for auction that he discovered that he had in fact got two different Lemon Hart rums:

The Lemon Hart story began in 1720 when Abraham Hart, a young and enterprising Jewish merchant who settled in Penzance from Germany, began importing and trading rums sourced from a number of islands in the Caribbean. His grandson Lehman ‘Lemon’ Hart took over the business toward the end of the 18th century and by 1804 Lemon Hart & Sons had been formed. It was soon appointed the first official purveyor of rums to the British Royal Navy by the Admiralty. By 1849 the Royal Navy is said to have been taking rum from the Harts at a rate of around 100,000 gallons a year. To this day the brand continues to thrive, now under the ownership of Canadian spirits company Mosaiq Inc.

One bottle of each rum went live in our September auction, watch out for more over the next few months. We expect these to be hotly contested as rum collectors and enthusiasts from around the world battle to get their hands on one or more of these extremely rare bottles. 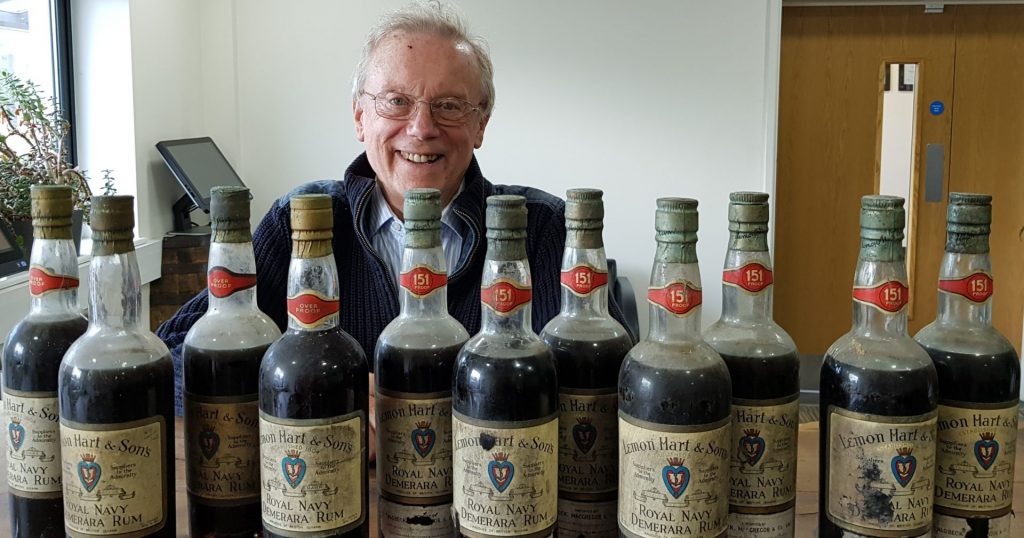 Charles with his father’s bottles