Home Articles What No One Tells You About Whisky Packaging

If you haven’t heard of Alexis Burgess you’ll certainly recognise his work. From his east London studio Burgess designs the display cabinets and luxury packs for some of the most sensational whiskies ever made. I wanted to get some behind the scenes insights on his whisky projects and learnt a lot about luxury whisky packaging.

And yes, I did ask him if he tastes all the whiskies.

Your first whisky project was with Johnnie Walker Blue Label. How did that begin?

I was very lucky. We were asked to design a book explaining the history of Johnnie Walker Blue Label. The book didn’t really work – because all questions people ask about Blue Label (what’s in it? Is that why it’s so expensive? etc) are trade secrets so we weren’t allowed to answer.

But in the process I met Jim Beveridge, Master Blender at Johnnie Walker, which was transformational. Spending a few hours with him changed my perception of whisky; until then it was something I drank, rather than something I thought about. Jim’s fairly gnomic, which is useful when you are trying to dodge questions about trade secrets, but also quite inspiring. There was a conceptual level to his work that I began to understand.

The packaging for The Macallan’s most prestigious bottlings is astonishingly luxurious. Is every detail so important?

We were brought in to see them just at the point when the prices started to go stratospheric, and our first thought was – if you are going to sell at these prices, every aspect of this thing needs to be perfect. And it needs to stand head and shoulders away from the competition in terms of finish and design. If it’s polarising, so be it. It cannot be boring.

I think what The Macallan have achieved is extraordinary, the owner, Edrington, is a relatively small company, with some fantastic whisky, that can move much faster than other whisky companies. It really is different working with them. They do what they like; and it isn’t always rational. That’s how they have become a true luxury brand – the lack of rationality. Rational things are boring. 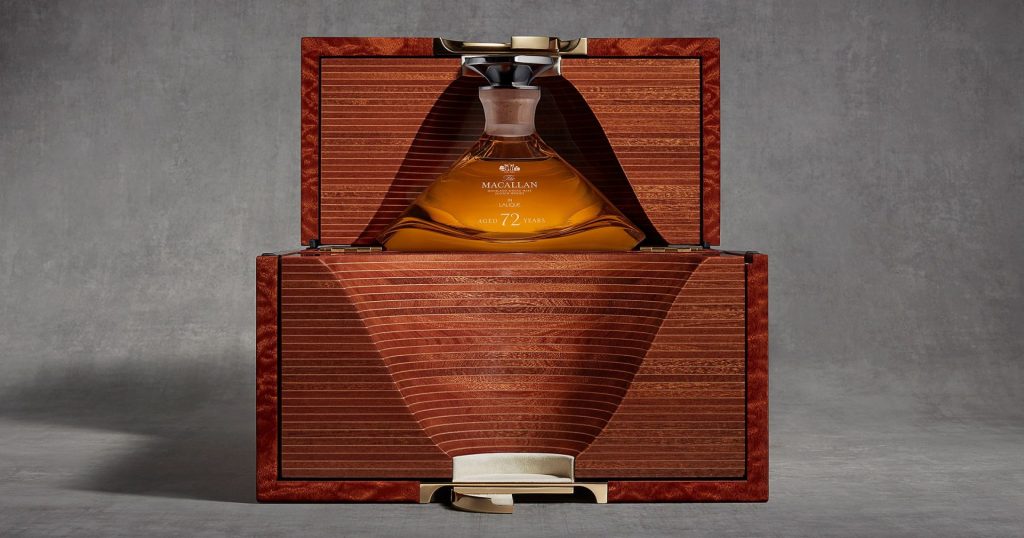 In contrast The Royal Lochnagar HRH Charity bottle pack is far more restrained. How did your brief differ?

The royal crest had already been drawn by Gerry Barney (a designer of legendary status – he drew the Guinness harp among other things) which turned up at our studio in an envelope. It was such a beautiful thing, and representative of a skill almost entirely lost – the ability to draw complex forms entirely by hand. Tracing it into the computer took an entire day because the curves were so specific. With that crest, and the provenance of the cask itself, sometimes it’s better for the designer to get out of the way.

I need to ask, why all the packaging? Isn’t what’s inside a bottle of whisky that counts?

Yes, absolutely, but I don’t think anybody is denying that. It’s not an either/or situation, you can have both.

Think of Moon Import, or Samaroli. Ichiro’s Playing Cards… They are made more special by the extra effort taken in what they look like, and what those labels mean.

A great whisky in a boring bottle seems like a waste to me; and a great bottle with a terrible whisky is worse.

I was wondering, do you need to taste a whisky before you design it?

We are insisting on this now – if only because some of the whiskies we work with I will never get to try otherwise.

However, often when we start the specific whisky isn’t there; it may still be in cask etc. Therefore we ask for samples that are similar, to get an idea.

Some of our favourite Burgess Studio designs:

‘All the work on this bottle and box was done by Gerry Barney’s crest; once we had that, the rest was easy.’ 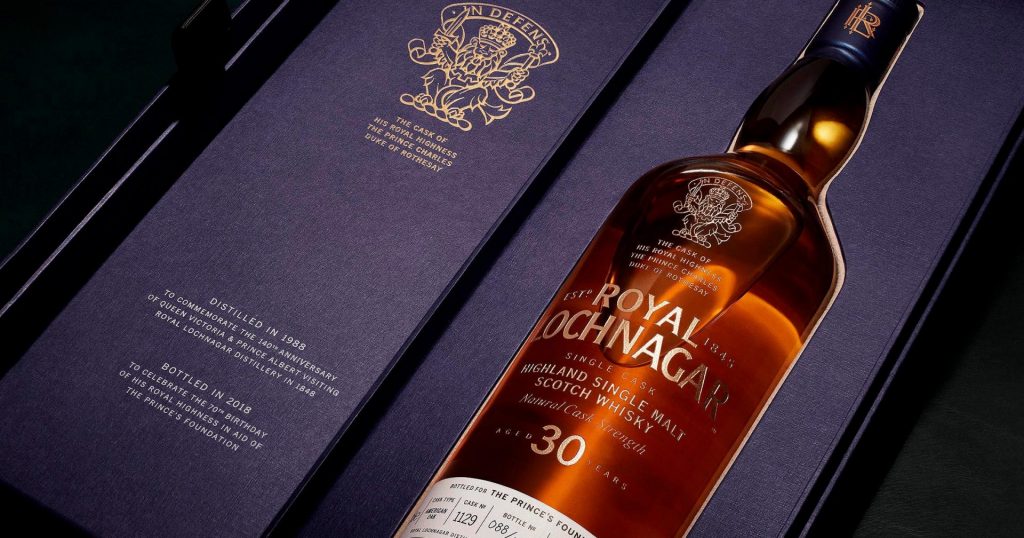 ‘This was our first project for The Macallan, and the second in the MOP series. Each pack contains a 20 year old Macallan, a signed folio of prints by Albert Watson, and a small book about the project.

We couldn’t agree on the colour of the outer box – we wanted blue and The Macallan wanted black – so in the end we made both. The Macallan used to be quite cool about things like that.

I think there are only about a hundred of the blue boxes though.

The 1946 bottles were single editions – each has a one off label featuring a photo of Albert’s. If you bought one of these you also received a huge silver halide print of the image on the label, framed and signed by the photographer.’ 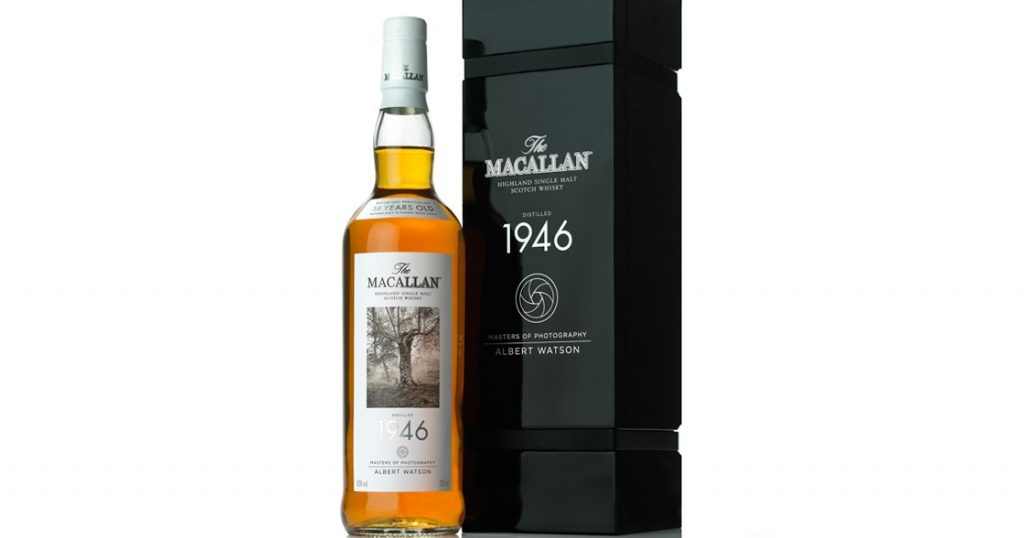 ‘An absolute monster. Magnum is the world’s greatest photographic co-op, founded in 1947 by Robert Capa and Henri Cartier-Bresson among others. The Macallan chose to work with not one, but SIX Magnum photographers on this project; you can see their names etched on the bottle. These are massive photographers, and you get one signed print from each of them inside the box. It’s an extraordinary set – just don’t try to fit it in your carry-on luggage.’ 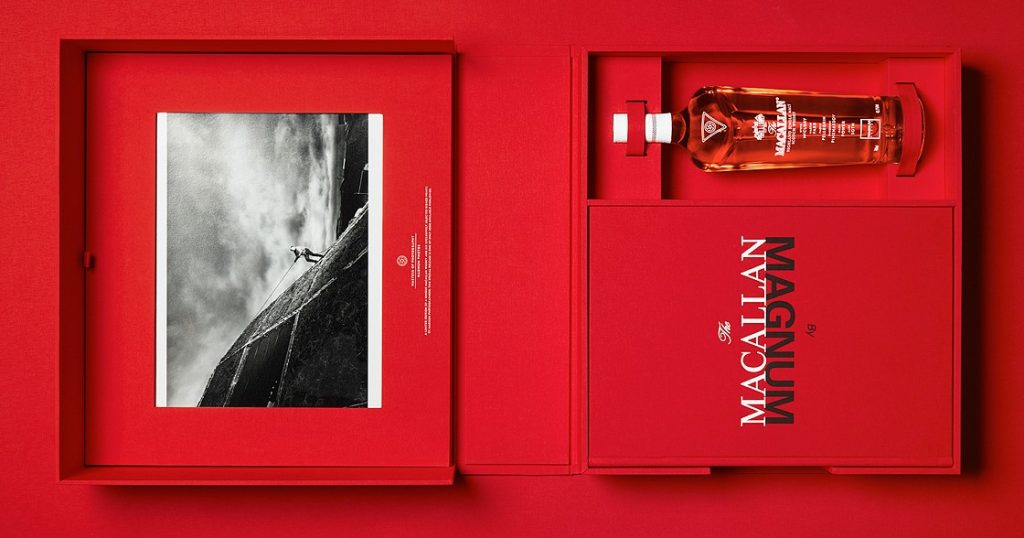 Macallan in Lalique, Golden Age of Travel, The Oceanliner

‘The first in a series of five releases of Macallan from the 1930’s, the “Golden Age of Travel”. As it was all about travel in the 1930’s, the logical thing was to put the decanter in a trunk. What was harder was finding someone to make it for us; traditional luggage makers of this quality are actually quite hard to find. In the end we found a maker in Ubrique, a small town in southern Spain famous for leather work; it’s near Jerez and surrounded by cork trees, which felt like a nice link to The Macallan.’ 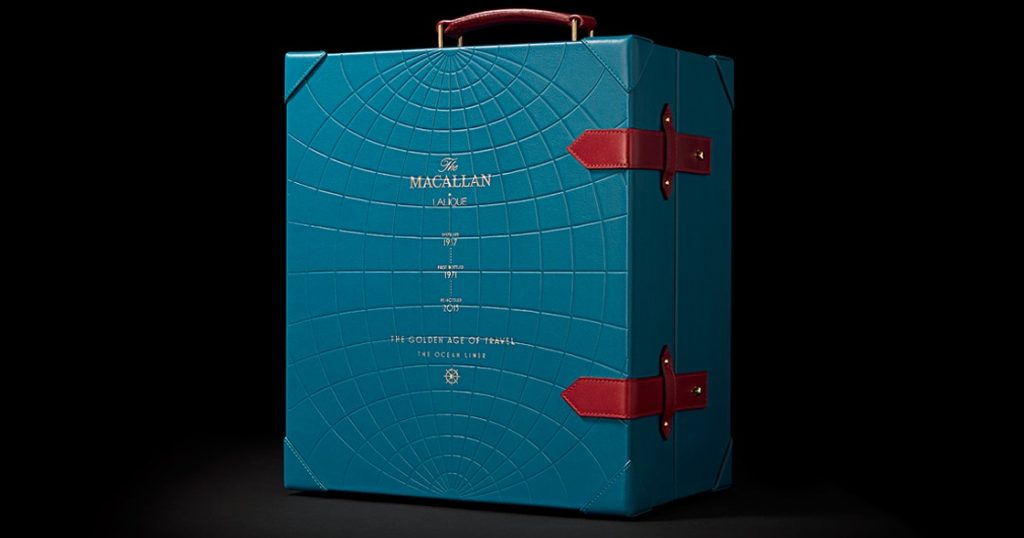 ‘One of the weirder shapes we have worked with (Lalique took an impression of the date stone at the top of Easter Elchies House and made a sort of house brick) this decanter always felt like a found object to us, something from a museum or an archeological dig. Therefore the fitment is made from museum grade Japanese linen; the same material they use in the British Museum. The external case was made of Corian, which looks like piano lacquer but has lots of mineral content; when you touch it, it feels like stone.’ 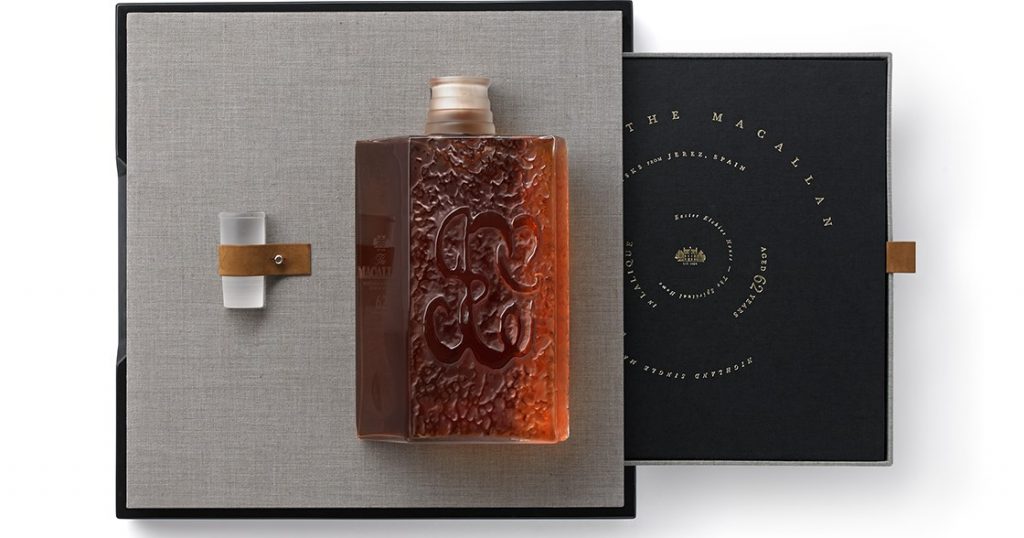 ‘This was the last of the six pillars series. The droplet is the symbol of the six pillar, hence the droplet on the case, which also forms a large M. The case was a nightmare to make; the top half of each side is a single piece of folded copper. Pure copper is very soft, very shiny, and tarnishes in minutes. In order to stop it turning green, it needs to be lacquered – but lacquering copper is difficult because the surface is so smooth the coating runs off – or craters like an orange peel. In the end we found a guy who restores rare musical instruments to do it for us; he was the only person who could deliver the level of polishing we wanted. The boxes were quite late being delivered.’ 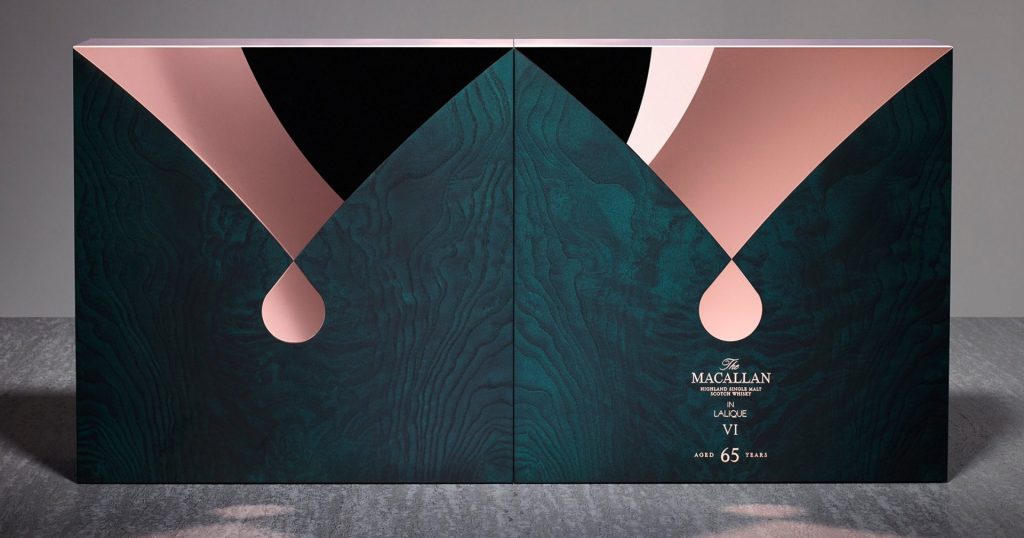 ‘The oldest Macallan ever bottled; to celebrate the opening of the new distillery, in a decanter that Lalique had designed specifically to reflect the waved facade of the building. We expanded on this idea for the case, taking the curve of the roof line for the lid cavity, and the plan of the still-houses for the plan of the case. Making the curved timber bowls involved creating our own plywood, with interleaving layers of mahogany and white maple.’ 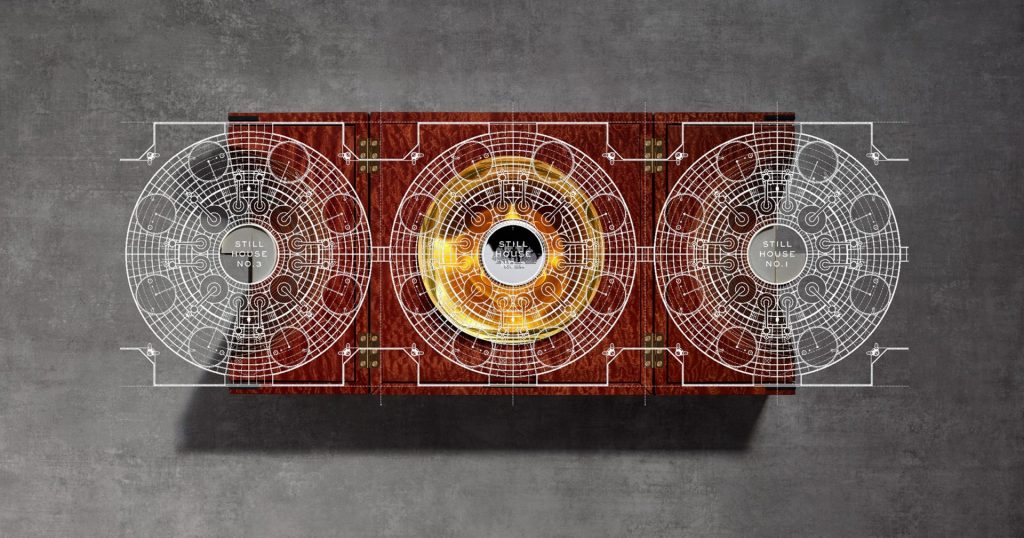 ‘This was the Genesis edition, that got released at the distillery and nearly caused a riot. The print inside is an architectural drawing of the distillery signed by Graham Stirk, the architect of the new distillery. It’s beautifully made; the paper for the print is pure cotton. The print was so long, and the line-work so fine that there was only one printing press in the UK that could make it for us – a gigantic old machine they used for printing maps. The whisky in this bottle is great too.’