Home Articles The Top 10 Most Expensive Whiskies Ever

The auction market for whisky and other spirits has seen spectacular growth since Whisky.Auction launched back in 2015. There have been some truly eye-watering prices achieved at auction. Here is a selection of some of the most expensive, rare and collectible whiskies we’ve seen at auction.

Almost inevitably, for anyone who has been keeping an eye on the whisky market in recent years, the current title of World’s Most Expensive Whisky is held by a bottle of The Macallan. The bottle in question is a 60 year old single malt distilled in 1926 and released as part of The Macallan’s Fine & Rare series.

Distilled almost a century ago in the same year as the first public demonstration of television, only 14 of these bottles exist.

You may have already noticed that this bottle of Macallan is also distilled in 1926 and is also 60 years old. That’s because they also happen to be drawn from the same cask. Cask #263 was first bottled in 1986 and has yielded 40 bottles in total.

This bottling however, is even rarer than The Macallan Fine & Rare release with only 12 bottles in all, and features labels designed by Valerio Adami. A further 12 labels were designed by British artist Sir Peter Blake, best known for co-designing the album art for the Beatles Sergeant Pepper’s Lonely Hearts Club Band.

If you’ve been keeping count, you’ll have noticed that this only adds up to 38 bottles. The other two were sold unlabelled, one of which ended up being hand-painted by Irish artist Michael Dillon. 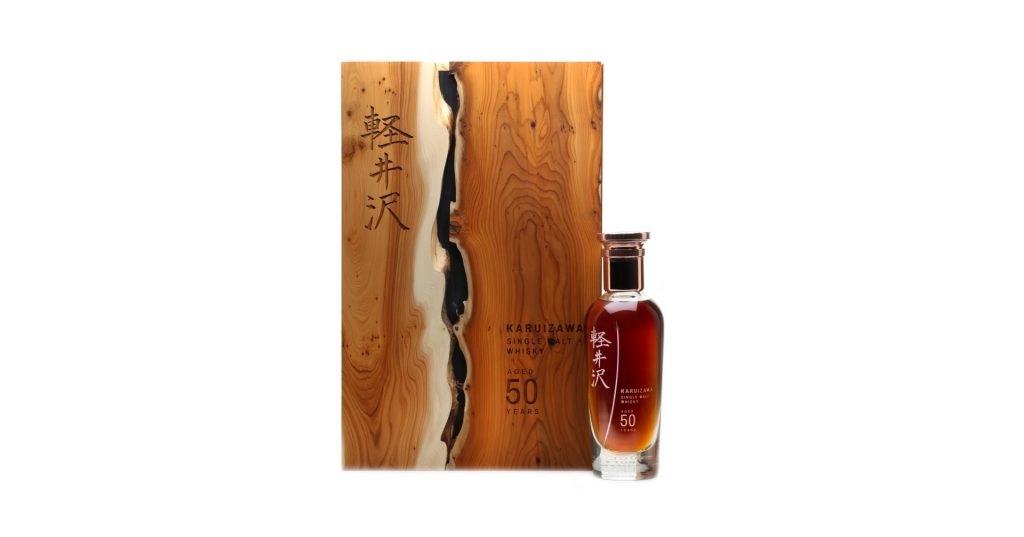 It might not hold the record for the most expensive Japanese whisky ever sold, however this specimen is rarer, with only two bottles in existence. What’s more, this bottle was sold as part of an auction to raise funds for charities battling plastic pollution in our oceans, so the staggering hammer price went to a great cause that is close to our hearts at Whisky.Auction.

For those lucky enough to have tasted it, it is a truly exceptional dram. The Whisky Exchange Director Sukhinder Singh described it as ‘possibly one of the best whiskies I’ve ever tasted, full stop.’

Japanese whisky experienced a meteoric rise in popularity and price as whisky enthusiasts realised the quality of the whisky. Whiskies from the closed Karuizawa distillery are some of the most sought-after Japanese whiskies. Bottles regularly change hands at auction for five-figure sums.
This is the oldest Karuizawa ever to have been released and is one of only 41 bottles. Each of the unique netsuke (miniature carved ornaments) attached to these bottles was hand-carved from the oak head of cask #5627 in which the whisky was matured.

Whisky collectors love a series and the thrill of finding those elusive bottles to complete a collection. There is none more sought-after than the Ichiro’s Malt Card series. As well as each bottling in the series being limited in number, the whiskies come from the closed Hanyu distillery, which ceased production in 2000. This was one of the first King of Diamonds batch of only 124 bottles.

The initial release in 2005 featured one bottle for each of the 52 cards in a deck. Two Jokers were subsequently released, as well as second bottlings of the Ace of Spades, King of Diamonds, Queen of Hearts and Jack of Clubs, taking the series to 58 bottles in total.

Sold at Whisky Auctioneer in 2020.

There are many revered whiskies bottled by Silvano Samaroli, and two in particular are frequently named among the best whiskies ever bottled. This Laphroaig 1967 is one of those two bottles, the other being Samaroli’s Bowmore 1966 ‘Bouquet’, which has also reached beyond £50,000 at auction.
The 1960s are regarded by many as the pinnacle of Islay’s whisky production, and examples from this period consistently appear on the wish lists of bottle collectors. Whiskyfun.com’s Serge Valentin awarded this particular Samaroli 98 points and described it as ‘approaching perfection’.

When it comes to creating spectacular packaging for stunning whisky, The Macallan is second to none. The distillery has a history of working with world-renowned artists and designers to produce beautifully packaged whiskies aimed at the luxury market, each piece a carefully crafted work of art.

To own one of the gorgeous Lalique crystal decanters in the Six Pillars collection would be special. But to have the full set, in a custom-made cabinet as this collection is presented in, would be beyond the wildest dreams (and wallets) of most whisky collectors. The six whiskies in this collection range from 50 to 65 years of age.

This whisky in this bottle was distilled at a time when Campbeltown was seen as the center of the whisky universe. In 1919 there were about twenty working distilleries in and around Campbeltown. By the time this was bottled in 1970 only two remained. The distillate in this bottle transports you to a bygone era.

This bottle is one of a series of 12 released by Dalmore, each given a name relating to the history of the distillery and estate. The Kildermorie is the nearby loch from which the distillery sources its water. The liquid is exceptionally rare, created by master blender Richard Paterson from four casks laid down in 1868, 1878, 1926 and 1939.

Another very rare bottle, this is the only known official single malt released by the Port Ellen distillery while it was still active. This whisky was bottled to commemorate the Queen’s visit to Port Ellen in 1980. It is believed that a small number of these were bottled as gifts to senior staff following the visit. It is unknown exactly how many bottles were made but it has been estimated at around 40.

This Port Ellen also has the honour of receiving the highest ever rating on Serge Valentin’s Whiskyfun.com, receiving a mighty 99/100. Serge’s closing words; ‘After having tried quite a few whiskies, I think – well, I know – that I will never find a dram that’s even better.’