As 2019 draws to a close, it gives us time to reflect on the bottles which have made the year so special. We’ve seen over 22000 bottles bought and sold, countless records were broken and we raised thousands of pounds for charity along the way.

So what was it about these bottles that earned them a place in our Star Lots of 2019? Some were the most valuable, or collectable, some were relative bargains. What was important in each case was its historic significance.

In short, these bottles were the reason why we love what we do.

Here are the Star Lots Of 2019 as selected by the Whisky.Auction team:

We started off 2019 with our first charity auction of the year. Funds this time went to The Prince’s Foundation to support the charity’s work at The Carriage at Ballater Station on Royal Deeside.

We expected widespread interest in this and were delighted when bottle number 1 became the most expensive bottle of Royal Lochnagar ever to have been sold at auction.

Whisky.Auction went on to auction a further 20 bottles of this whisky for the same cause in March 2019.

Cognac has had a strong year overall in 2019. This pre-phylloxera Bisquit dates from 1811. In the late 19th century the phylloxera epidemic destroyed most of the vineyards in Europe.

Interest in old Cognac, not just the grande marques, continued to grow in 2019.

March again and this time a bottle of Clynelish 12 Year Old, bottled circa 1960s which means it dates from the old Clynelish Distillery (renamed Brora in 1968). The condition of this bottle was a particular highlight as was the inclusion of the original purchase receipt from Strachan’s of Royal Deeside, framed and dated 7 January 1970.

This presentation with a white label was discontinued for the orange label in 1977.

In April we saw the Ardbeg 1974 Double Barrel set go under the hammer. This was one of 250 sets released worldwide, bottled in 2007.

The set contained two single cask Ardbegs distilled in 1974, both bottled at cask strength and packaged in hand-blown bottles with sterling silver labels.

The leather case from renowned London gun maker Purdey and Sons also included an Omas pen made from a barrel, a leather-bound notebook to record tasting notes, and eight sterling silver cups.

April also saw us auction a crystal decanter of Royal Brackla 60 Year Old. This was distilled in 1924 and bottled for the Japanese market to celebrate the 60th anniversary of Emperor Hirohito’s reign in 1986.

Two Buchanan’s terriers are etched into the lower corner of the decanter’s face.

One highlight of the year was undoubtedly this litre bottle of Chartreuse Green from the Tarragona production, bottled 1912-1913. The recipe is all natural, made up of many different plants, herbs and other botanicals. The sugars in Chartreuse break down gently over time and the flavours intensify to produce a fabulously complex liquid.

These bottlings from Tarragona are of particular historical significance.

Produced by Carthusian monks in France since 1737, the monastery and distillery were nationalised by the French government In the early 20th century. The monks, unwilling to give up their secret recipe, moved production to Tarragona, Spain. They later returned home but continued to run the distillery in Spain until the late 1980s. 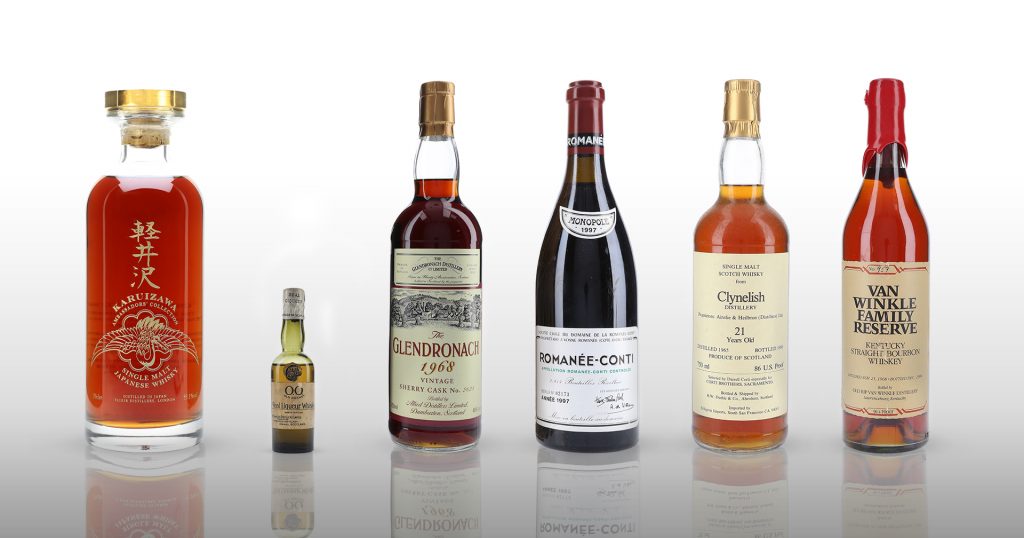 The highlight of the auction was a bottle of Karuizawa Ambassadors’ Collection single malt Japanese whisky, a marriage of some of the last remaining ex-sherry casks of Karuizawa, distilled between 1972 and 1999.

The October Miniatures & Memorabilia Auction featured a collection of single malts and blends from the first half of the 20th century. The collection included a piece of liquid history, Old Orkney ‘0.0.’ Real Liqueur Whisky, dating from the 1920s-1930s.

Stromness Distillery was located on Orkney and closed in 1928.

In November we had a collection of whisky from the personal collection of Andrew Dewar-Durie of Durie CBE, Managing Director and then Chairman of Allied Distillers in the 1990s.

The collection included this one of a kind Glendronach 1968 single cask bottling, presented to Andrew Dewar-Durie by his colleagues on the Board of Allied Distillers Limited, Glendronach Distillery, 28th October 1999.

This bottle of Romanée Conti 1997 came with impeccable provenance.

Wines from Domaine De La Romanée-Conti are some of the most expensive and sought after on the planet, with a tiny output from its low-yield and extremely old vines. It’s estimated that only around 450 cases of Romanée Conti are produced each year, a tiny output when compared to the great Chateaux of Bordeaux, many of which produce tens of thousands of cases of wine a year.

Not only this, the wines are considered exceptional and amongst the finest in the world.

In June, the auction featured a number of whiskies bottled for Corti Brothers in the US. It wasn’t an easy choice but this 1965 Clynelish (Brora) bottled by R.W. Duthie & Co. had to be the highlight. A second tranche of Corti Brothers bottles went under the hammer in December with some record results, including a second bottle of this Clynelish.

This bottle was signed by Narsai M David, founder of Narsai’s Restaurant, who worked closely with Darrell Corti on many subsequent releases.

Last but not least is this seldom seen bottle of Van Winkle Family Reserve, distilled way back in 1968 at the old Stitzel-Weller distillery in Kentucky.

Older expressions such as these are particularity hard to find and are seldom seen at auction.

The first auction of the new year begins on 12 January, and we look forward to seeing what 2020 brings!