The story of an individual bottle of whisky and its journey after it was bottled can be as intriguing as the story of the distillery it came from. Here’s one such story:

Back in 2009 our client was living and working as a lawyer in New York City defending major corporations in high stakes litigation.

One litigation involved a class action against his corporate client, one of the world’s biggest tech companies, in which the company was facing over $1 billion in potential liability.

The lawyer opposing him was tough and tenacious. Ultimately the case settled for ‘peanuts’, but enough for the plaintiffs’ lawyer to receive a handsome attorney fee.

One morning, after the case was over, our client opened his apartment door to find a large box at his doorstep. Opening the box, he found a card from the plaintiffs’ lawyer thanking him for settling the case. Also in the box was a beautiful mahogany case, ‘my jaw dropped!’ our client told us. The case contained one of the finest single malt Scotch whiskies in the world. It was a Bowmore 1957.

Specifically, the bottle in the box was a Bowmore 38 Year Old Islay single malt Scotch whisky. It was distilled on 14 January 1957 and while it matured it was carefully watched over by the distillery manager for 38 long years. It was eventually bottled at 40.1% ABV when there was no other option but to bottle the whisky, lest it fall below 40% ABV.

Already a rare whisky, this particular edition was bottled for the US market and imported by White Rock Distilleries Inc. The bottle number is 574 of 861 and it was bottled from cask number 216-220. The lawyer has carefully stored his foundling whisky ever since it arrived on his doorstep. 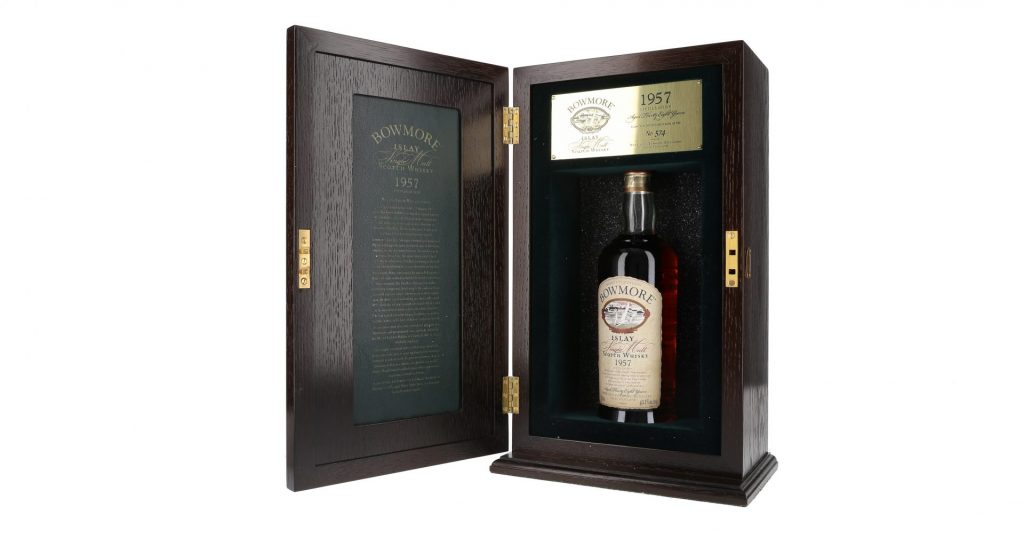 This year our client decided to donate the bottle to the Community Foundation of Western Nevada in Reno, Nevada, where he lives. This means that the proceeds from the sale of this outstanding Bowmore 1957 will help support a number of world heritage societies through targeted grants for activities approved by the Community Foundation. Our client chose this charity as he is himself is an active participant in over a dozen major heritage societies in the United States and Europe.

He told us, ‘I fondly hope that this rare bottle will find a good home!’

‘Colour: pure gold. Nose: much more complex. There sure is lots of citrus, passion fruit etc., but there’s also lots of beeswax, sea air, flowers and plants, accompanied by all their sub-aromas. Propolis, tar, shoe polish, apricot jam, ripe mirabelle, pineapple liqueur, dried figs. Then it goes back to some ‘resinous’ aromas, like old turpentine… This is just endless. What a beauty! Wait, now I have a walk in the forest under the rain. Fern, mushrooms, humus… It would have been simpler – and quicker – to write down all the aromas you can’t find in this whisky. Let’s move on… Mouth: rather bold attack, with quite some tannins right at the start, but they are soon to get replaced by some wax, eucalyptus, old books… A little dusty and, to be honest, tired. There is almost no point in rating the palate, this malt stands just by its nose. And what a nose!’ 93 points, Serge Valentin, WhiskyFun.

Bid on Bowmore 1957 38 Year Old in the current auction

Interested in consigning whisky for charity? You can find more details on our dedicated charity page.