Tenuta San Guido’s Sassicaia is one of the most illustrious names in Italian winemaking, and one which is celebrating its 50th anniversary this year with the release of the 2018 vintage. Like all great Cabernet blends, the 2018s will take at least five to ten years to hit their straps and soften, though of course it is fascinating tasting such inky, densely structured fine wines in their youth should you get the opportunity. In the meantime we have focused on the 2001, 2002, 2009, 2012 and 2014 vintages, which make for a fascinating comparison at different stages of their development across the last twenty years.

As one would expect, wines and wine styles from Europe’s classic regions are generally the result of decades, if not centuries, of gradual refinement and evolution, as individual grapes varieties, clones and winemaking techniques are specially tailored to bring out the best in each region’s vineyards. It takes a special kind of visionary to look further afield, ignore the obvious routes, and make a wine that can truly stand shoulder to shoulder with the world’s greats.

Aristocrat Marchese Mario Incisa della Rocchetta was born into an Italy where the overwhelming majority of wine produced at the time was simple stuff, made for immediate consumption, and made from around 350 different varieties cultivated from region to region. The quality side of the market was largely limited to Tuscany’s Sangiovese and Piedmont’s Nebbiolo grape varieties, but Rocchetta’s aspiration was to make wines in the style of the great red Bordeaux he had tried as a student in the 1920s. He was convinced this could be replicated in Italy, particularly having tasted an especially refined bottling with similar aromatic characters to great Claret from a local vineyard with the Salviati Dukes in Migliarino.

In the 1950s the Marchese settled on Tuscany’s dry and sunny, yet windy Bolgheri district as the place to plant: 100 to 300 metres above sea level with stony, clay and limestone soils, similar to those of Bordeaux, gave him cause for optimism and a name for his wine ‘sasso’ meaning stony in Italian. For years the story went that the cuttings for Sassicaia’s vineyards came from Chateau Lafite, although his son Nicolo denies this, saying they instead came from a 50 year old vineyard in Pisa. Whatever their pedigree, the results were immediately impressive: dark, brooding wines of great colour and backbone. Wines which completely confounded locals, who declared them undrinkable, resulting in them being private bottlings for consumption by the family between 1948 and 1967 until the first official release in 1968.

By the mid-1970s the reputation of the Sassicaia had started to take off, and in 1978 it triumphed in a blind-tasting of 33 international Cabernet blends hosted by the UK’s Decanter magazine; North America soon embraced it too, with critics there christening it as a ‘Super Tuscan’ wine, all the more so because as a wine not made with indigenous varieties it was saddled with being labelled as a Vino da Tavola or table wine (despite out-pricing virtually every other wine in the region) until it achieved its own DOC with Bolgheri in 1994. 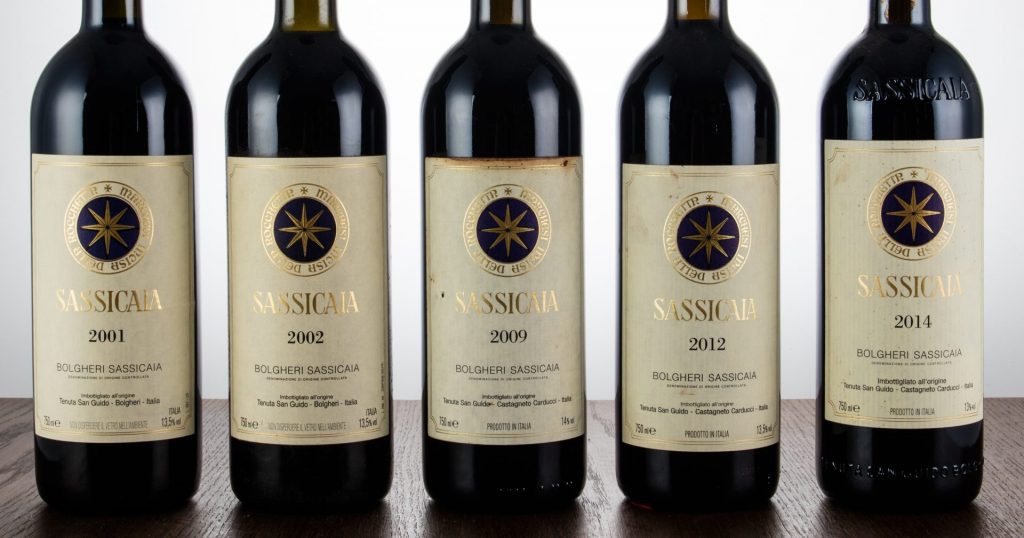 These days Sassicaia averages around 180,000 to 200,000 bottles per year in terms of production, and the blend is invariably 85% Cabernet Sauvignon and 15% Cabernet Franc.

This was a vintage with very little rainfall during summer, leading to an early harvest which began during the first week in September. Considered to be a potentially very long-lived wine like the 1998, it was aged in one third new oak for 22 months.

Unquestionably a lighter vintage, but one which divided American and European critics, the latter celebrating the wine’s drinkability and elegance. Heavy rains in June and July had a significant impact, but a sunny September helped complete ripening and saved the day.  A ‘3 Glass’ wine in Italy’s Gambero Rosso guide.

The team at Sassicaia gave an unambiguous assessment of the growing season in 2009: it was ‘excellent for the entire year’, with rains in the winter and late spring, and sunshine and higher temperatures than average in the summer, allied to cool night time temperatures. This scored 99/100 from critic Daniele Cernilli, and was the Gambero Rosso’s Red Wine of the Year in 2013, who described it as ‘perfection’.

Also an excellent vintage. Following a cold and rainless winter which eliminated vineyard pests and delayed budding, the temperature picked up in May, with June rainfall replenishing water in the soils, prior to an intensely hot summer, very much like 2003 and 2012, but with much cooler nigh time temperatures giving the vines a rest. Strong sea winds eliminated 10% crop, aiding concentration, and some Cabernets were picked early due to the high temperatures.

A really interesting Sassicaia from a cooler vintage – indeed the only one in our line up to be labelled as only 13% alcohol. A mild winter, with very little rainfall gave way to a warm spring until late July. A cooler than average August extended the growing season, making for a more subtle wine with bags of finesse.

View All Sassicaia at Wine Auction