The Miniatures & Memorabilia auction always turns up some fantastic lots for whisky lovers and history fans alike. As much as we love our full size bottles, receiving a pallet of old whisky memorabilia is like treasure hunting, and we never know what we might find.

Every whisky memorabilia auction includes branded whisky jugs, they range from everyday bargains to highly collectable jugs such as the famous green Ardbeg jug. You’ll always find branded glasses, anything from Glencairns to Yamazaki Nosing Glass, and wine and spirits decanters of every description too.

However, beyond jugs there is plenty more to discover. As cellar manager I’m the one that gets to sort through our lots first, and here are a few pieces I was delighted to see turn up for sale.

We have two of these William Grant’s Family Reserve Playing Cards in our current auction. The adverts on each card date from 1928 to 1940, so the brand’s iconic triangular bottle is nowhere to be seen. These old whisky adverts have less of the drama and pretentiousness that we see in today’s spirits marketing, where the adverts often look more like perfume commercials. But they make up for it with simple charm and an abundance of puns. Several of these would never make it past the UK’s Advertising Standards Authority today.

The Jokers suggest that ‘Grant’s Scotch Whisky is the Best! When you’re down and depressed…’ Certainly not advisable.

The advert on the 9 of Clubs dates from 1936 and explores all the unlikely things one may be able to do: ‘swim the channel’, ‘do a hole in one’, then ‘explain to the wife why you’re late’ and ‘even explain a joke to a Scot’, before concluding that ‘You can’t beat Grant’s Scotch Whisky’. A couple of those claims could be problematic in 2020.

The only advert to prominently feature a female figure is on the Queen of Clubs, which appeared in the Manila Daily Bulletin in 1939, and is captioned ‘Bonnie Scotland’s Best’.

Then we have the puns, which are not bawdy or even particularly humorous, but feature a simple striking image and caption. These all come from 1936: ‘Ascendency’ features an RAF bi-plane turning right, and asks the reader to ‘bank’ on Grant’s Liqueur Whisky. On another, a parachutist is descending to the ground beneath the words ‘it will suit you down to the ground’, and ‘men who know the ropes’ accompanies a large sailing ship, with its rigging clearly visible. 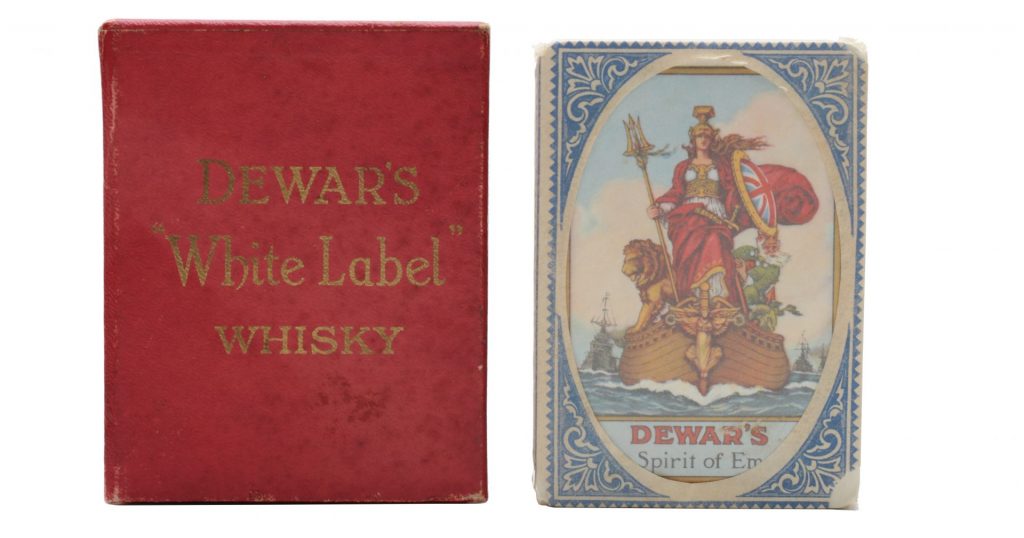 I also love these Dewar’s Spirit of Empire Cards, but the beautiful wrapping meant we were loathe to open the original seal for photography. If the winning bidder reads this article and opens the deck, we’d be delighted to see some pictures! 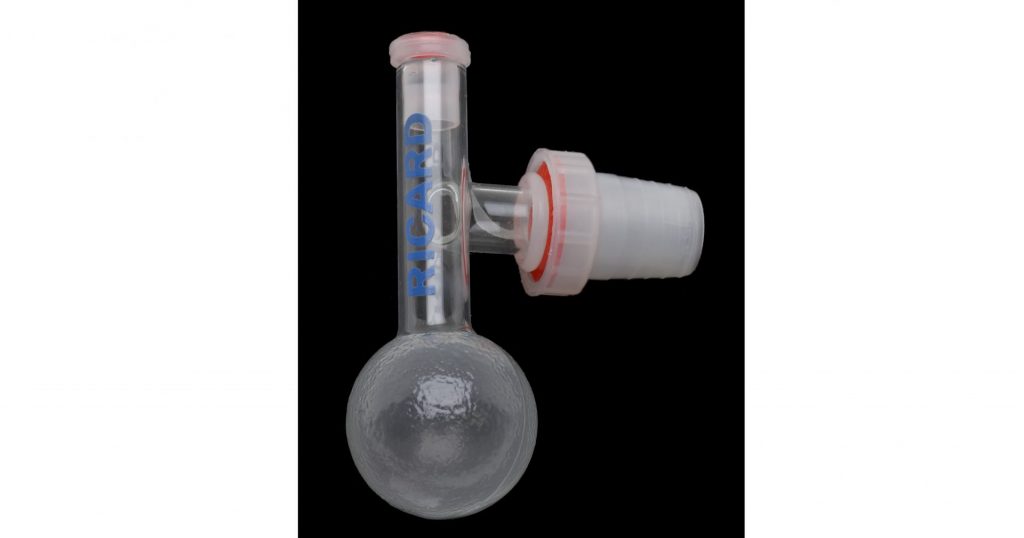 This lot solved a personal mystery of mine. The Ricard Doseur Boule may look more at home on the set of Breaking Bad, but it’s actually for serving. I came across an unbranded one a year or two ago and kept it in my drawer, always meaning to find out what it was. Then we received this amongst some whisky memorabilia and, with the help of the brand name and a bit of googling, we found out that it is for measuring and serving drinks, namely Ricard. First you fit the device in to the bottle, then you tilt the bottle to fill the ball shaped chamber, then open the cap to pour the measure into a glass. To test my device I fitted it to a bottle of tonic I had handy, but the fizz caused the liquid to erupt on to my less-than-pleased colleague. Learn from my mistakes and use this for still beverages only. 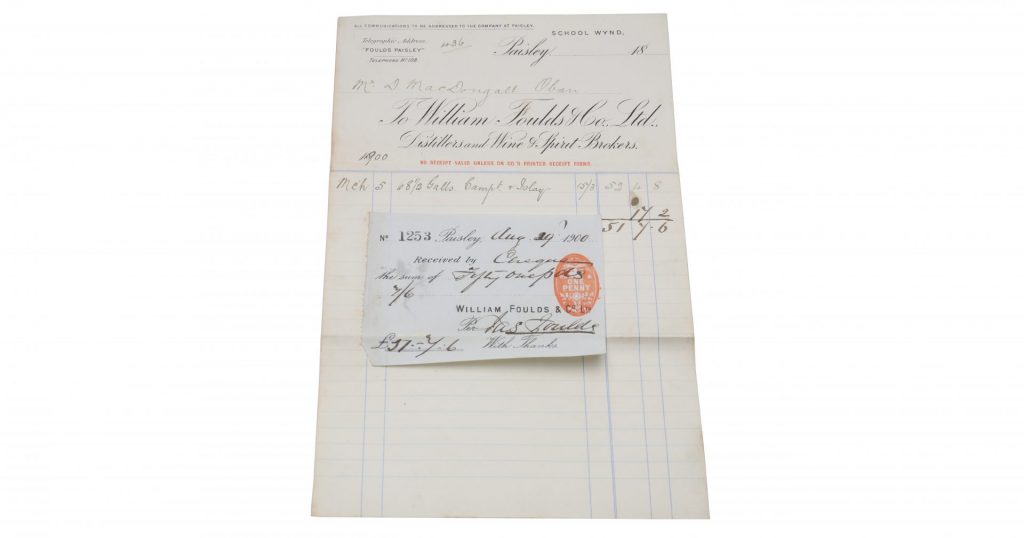 This William Foulds & Co. Ltd Purchase Receipt, dated 1900, follows on nicely from the price list we had from the same company in our previous Miniature & Memorabilia auction. It shows the purchase of 68 and ½ gallons of Campbeltown and Islay whisky by a Mr D MacDougall, Oban, for a price of £51.7s.6d at the beginning of the 20th century. This equates to approximately 310 litres of Scotch, so perhaps Mr MacDougall was a publican, a grocer, or maybe just a big fan of peaty malts? Either way, a receipt for a specific transaction from so long ago is a rare and delightful find. 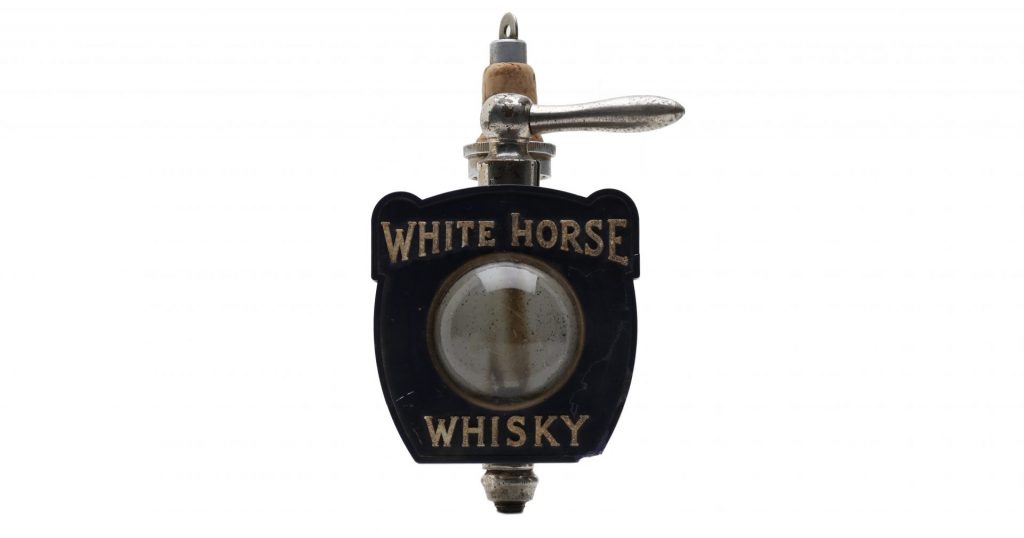 White Horse items show up at every auction, whether bottles or memorabilia, and there’s always something quirky with a story to tell. I’m particularly fond of this White Horse Optic Pearl dispenser, designed for bar backs by Gaskell & Chambers, ‘Britain’s Biggest Bar Fitters’. As ‘Property of White Horse’ is stamped in three places on this, it’s clear who owned it. This deceptively hefty piece weighs 800 grams and was designed to be accurate and hygienic. We think this could date from the early 20th century, based on Gaskell & Chambers advertisements from that era. 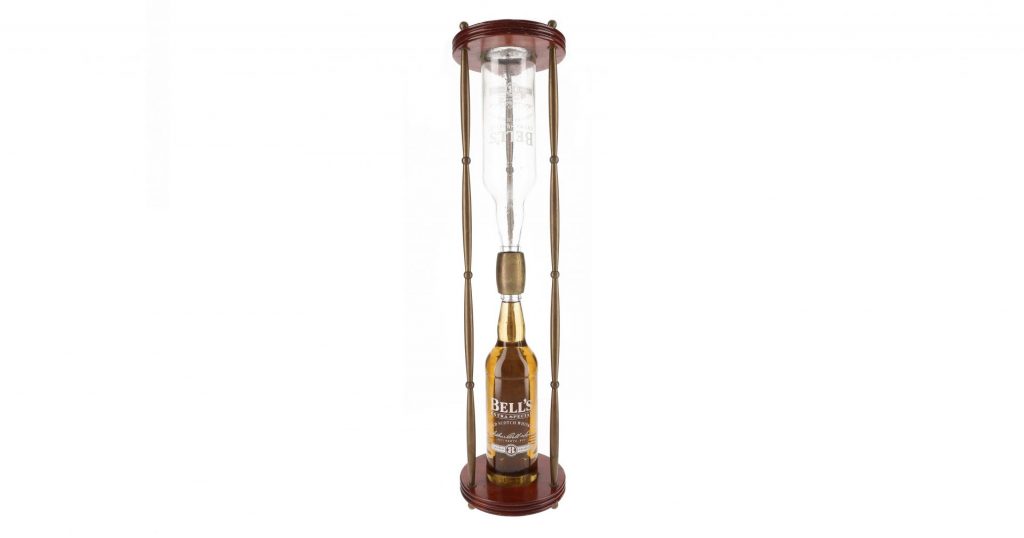 What better way to track the passing of time than with a Bell’s Hourglass? We tested this as our office clock for a few days when it arrived. We needed to check it worked, and it did. It takes one hour for the liquid to pass from one bottle to the other, with a metronomic, but inaudible, dripping that I found to be quite a marvel. While it may be a shame that it’s not real whisky inside, this would be a delightful addition to any collection of whisky and memorabilia.