For the Virtual Whisky Show 2020 Sukhinder Singh presented a tasting focused, unusually, on investment. I say unusually because too many conversations about investment grade whisky fail to consider the most important thing: the quality of the liquid inside the bottle. The advice here is not just for the speculative whisky investor. Every whisky enthusiast has their own investment goals. For instance, some whisky investors are systematically trying to taste as many different whiskies as they can on a tight budget and aim to only ever buy on release. They never want to hear that they ‘could have bought it cheaper’. Others are scrupulously trying to catch old and rare whiskies before their prices put them too far out of reach and they are gone forever. Some investors are focused merely on spending their money wisely, not paying huge sums on whiskies that are overhyped and might come down in value once their bubble bursts. So beware the whisky enthusiast who claims to look down upon whisky as an investment. Every whisky you taste, good or bad, has been an investment of sorts.

In the tasting we showed a handful of whiskies (and one rum) that we felt were great options for investors and shared a few general tips. Here’s a summary for you if you missed the tasting.

When starting to invest without a huge budget it is difficult to know what to buy, so don’t be shy of asking for advice. There are countless books and websites you can study but few of them will be as close to the action as your own favourite whisky shop keeper. Keep asking what they have enjoyed recently and calibrate it against your own palate and budget.

If you do take advice from whisky critics it is difficult to know who to listen to.

If you’re asking who’s scores are most likely to affect the values of your whisky investments then we tend to suggest whiskyfun.com as so many enthusiasts read the reviews and act on them.

There are more and more stories about fakes floating round the market.

There are hundreds of ways we check the authenticity of a bottle but this takes years of experience, so my top tip to avoid getting duped by fakes is to only ever buy from genuine retailers and auction houses. Not only that, make sure you are clear about their anti forgery policy, and never buy spirits from sellers on social networking pages. You can find more tips here.

How do you know what to invest in?

Another question we get asked is, with so many new whiskies appearing and distilleries launching their first ever products, some at astonishingly high prices for extremely young whisky, how do you know what to invest in? Time will tell, but in the meantime a quick comparison of prices for mature whiskies from established distilleries might lead you to play safe and buy a great mature whisky instead.

These are all very general, if essential, tips but there are more specific things to look out for too: 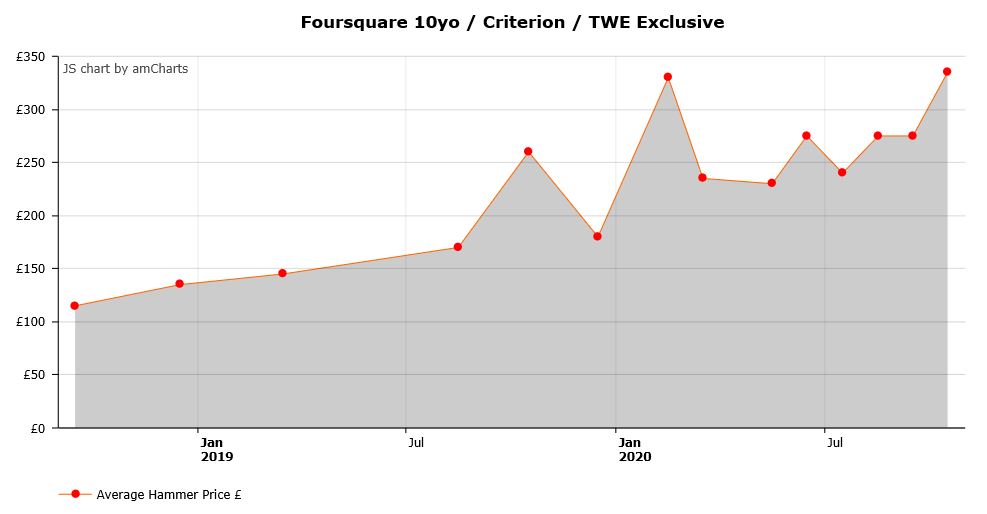 Firstly, find out what is ‘the in thing’, it might not even be whisky!

When Foursquare Criterion 56% ABV 70cl was bottled exclusively for The Whisky Exchange it was released at £145 ex VAT. It has doubled in price since then as more and more enthusiasts became aware of its attractive and unadulturated purity. Criterion was the fifth entry in the limited edition Exceptional Casks range. It’s a Barbados rum matured in a combination of ex-bourbon and Madeira casks. It is uncoloured and has no additives. 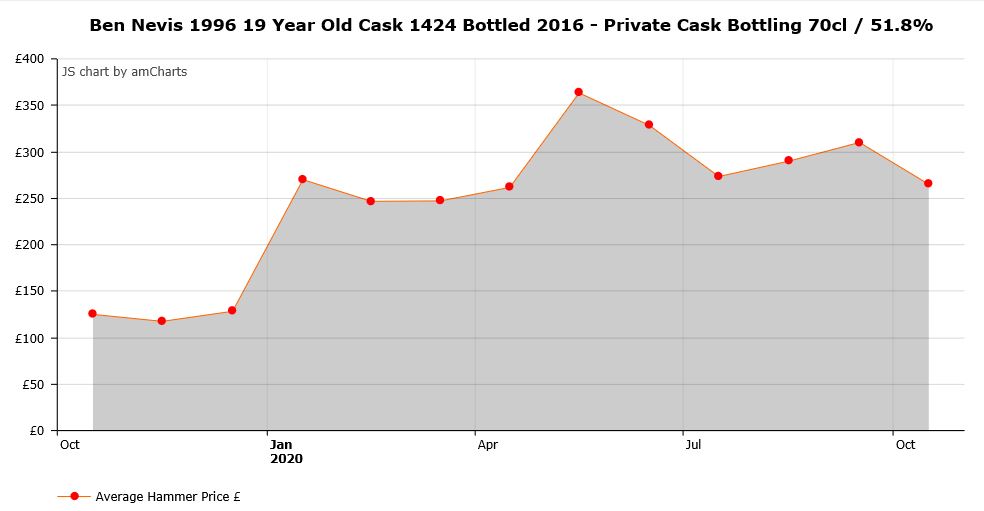 Think outside the whisky box…

Age isn’t everything, look at private bottlings for instance, particularly from single casks. There are countless investors who have bought casks and then chosen to bottle them. It’s no guarantee of quality so look for private casks that have received great reviews. Ben Nevis 1996 19 Year Old Cask 1424 51.8% ABV 70cl was the obvious example here. It’s was bottled in 2016 from a privately owned cask and is exclusive to Whisky.Auction. Cask ownership can be quite a big gamble but some lucky owners do stumble upon some superb whiskies. This one launched at Whisky.Auction at £115 and gently rocked up in price until a rave review from Serge Valentin brought the whisky to a larger audience and things accelerated quickly. This is no blockbuster, it’s an elegant and grown up whisky for contemplation.

Despite the well publicised increases in whisky prices recently, not all great whiskies have been swept up in the enthusiasm. Look for whiskies that remain undervalued. A good place to start is with overlooked independent bottlings of old whisky. Many buyers are chasing high alcohol bottlings, so while they are distracted take a punt on supremely drinkable 40% ABV editions such as Glen Grant 1965, bottled 2013 Gordon & MacPhail 40% ABV 70cl. Not many bottlers can boast warehouses as bottomless as Gordon & MacPhail’s and this Glen Grant, at 47 years old, is impressively delicately oaked and well-priced at £834 ex VAT.

A limited edition official bottling of a well made heavily sherried whisky is almost guaranteed to be in high demand from the moment it is released. Glendronach 1993, 26 Year Old Cask #6849 50.9% ABV 70cl was bottled exclusively for the scotchwhisky.com website. Unfortunately, the whisky didn’t arrive before the website closed in 2019, so it now serves as a collectable relic. The whisky is intensely rich with fruit and spice. It’s an excellent Glendronach Pedro Ximenez sherry cask. 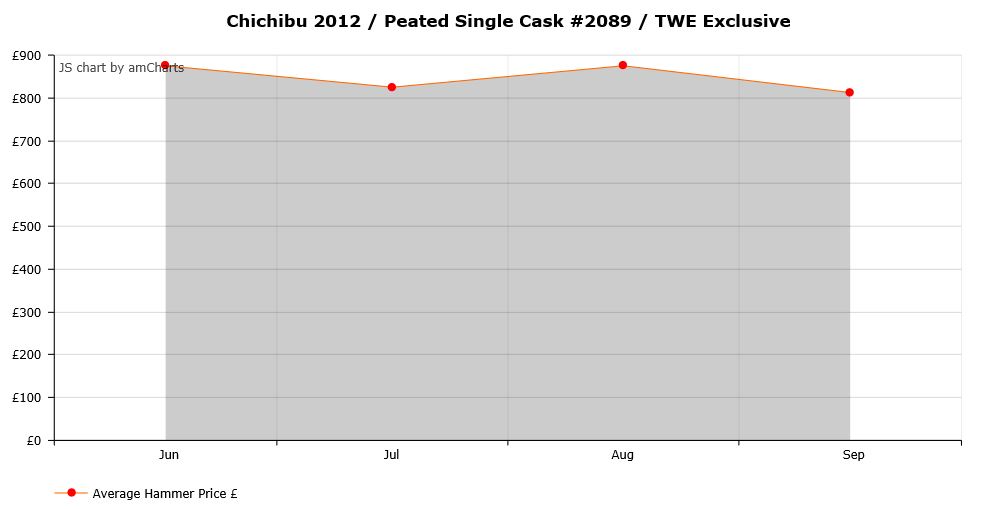 There was a time when Japanese whisky was seen as an inferior copy of Scotch, but more recently the familiar (though more intense) flavours of Japanese whiskies have captured the world’s imagination and there has been a growth in demand for all whiskies Japanese.

It’s true that not all Japanese whisky is made to the same specifications, so take care to choose distilleries and bottlers with a strong track record. Chichibu Single Cask #2089 60.8% ABV 70cl bottled exclusively for The Whisky Exchange was released in 2019 at £229 ex VAT and quickly reappeared on the secondary market where it has maintained a steady value of between £800-£900 at auction. It is a single cask of peated Chichibu distilled in 2012. It has a superbly rich texture with attractive barbecue smoke and plum sauce on the palate. 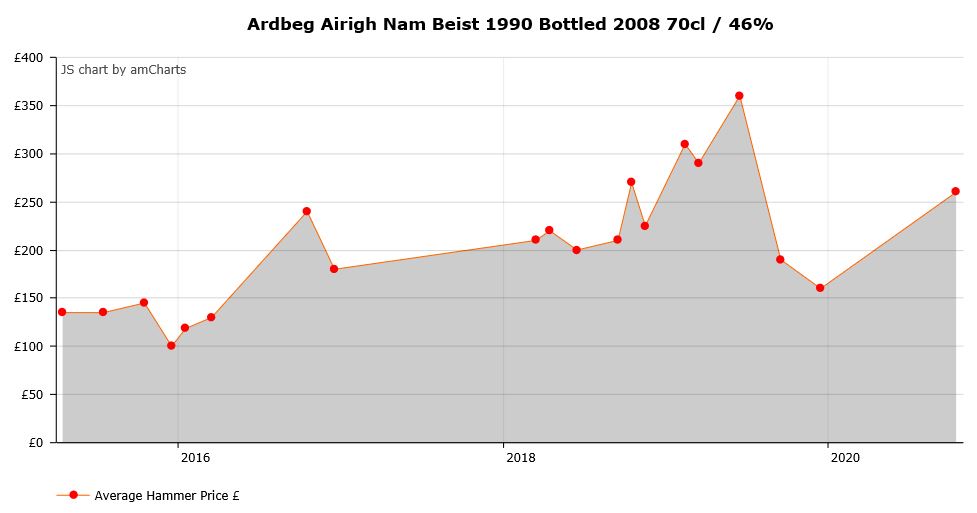 It’s all about the liquid

The most important thing to remember, always, is to choose good quality liquid, and choose well. A great whisky will remain so for decades to come and people will keep opening bottles of great whisky while the lesser ones get left at the back of the cupboard. Look for popular whiskies that are being ignored by collectors. Ardbeg 1990 Airigh Nam Beist bottled 2008 46% ABV 70cl was a delicious whisky on release and while it remains as good as it ever was, it is now increasing difficult to track down a bottle. It was discontinued due to exhausted stocks but was one of the most popular Ardbegs because of its trademark powerful yet sweet and aromatic peatiness. The prices achieved for Ardbeg Airigh Nam Beist continue to creep up, much as you might imagine, but they haven’t gone crazy yet, even when bidding topped out at £350. It’s encouraging for the more adventurous investors that the prices fluctuate considerably, so with a little luck and patience you can still pick up a bargain.

Other spirts are available

Remember that while much of our attention is on single malt whisky there are other spirits besides which are good to invest in right now. Don’t ignore blends, gins, liqueurs, Armagnacs and other categories while they are still affordable.