Last year, our auction director, Isabel Graham-Yooll made her selection of The 3 Best Wine Books Of All Time, this month it’s the turn of auction manager, Jeremy Lee, to select a trio from the crop of the wine titles that have informed his thinking and drinking after far too many years in the drinks trade.

More than any other single book, perhaps, this fired my enthusiasm for the world of ‘Fine Wine’ when I joined the drinks trade in the mid-1990s. Starting off my career in the subterranean cavern that was Harrod’s wine cellar, I was fascinated as to why one bottle of Bordeaux with a minimalist label (and of course, no back label) was worth £5, whilst another, much the same to my untrained eyes, was worth £2000. This book helped explain the intricacies around each celebrated name, producer and, of course individual vintage, spanning harvests from 1653 to 2001, with regular asides relating to tastings, collectors and characters he met on his travels.

Broadbent began his career in the early 1950s at Layton’s Wine Merchant and followed his mentor Tommy Layton’s advice to the letter as to the best way to learn and remember the wines he’d tasted, by meticulously noting every wine that passed his lips – all 85,000 of them, in around 140 notebooks.

In 1966 he began his career at Christie’s, creating the wine department for them, and effectively single-handedly created the international fine wine market on the way, making his name by bringing mind-boggling vinous treasures from the cellars of English and Scottish aristocrats to market, and tasting extraordinary wines along the way.

Michael Broadbent MW passed away aged 92 in 2020, but this extraordinary record of his time in the trade is a worthy testament to his career. The 2002 edition can be picked up online for a meagre £4 at the time of writing! 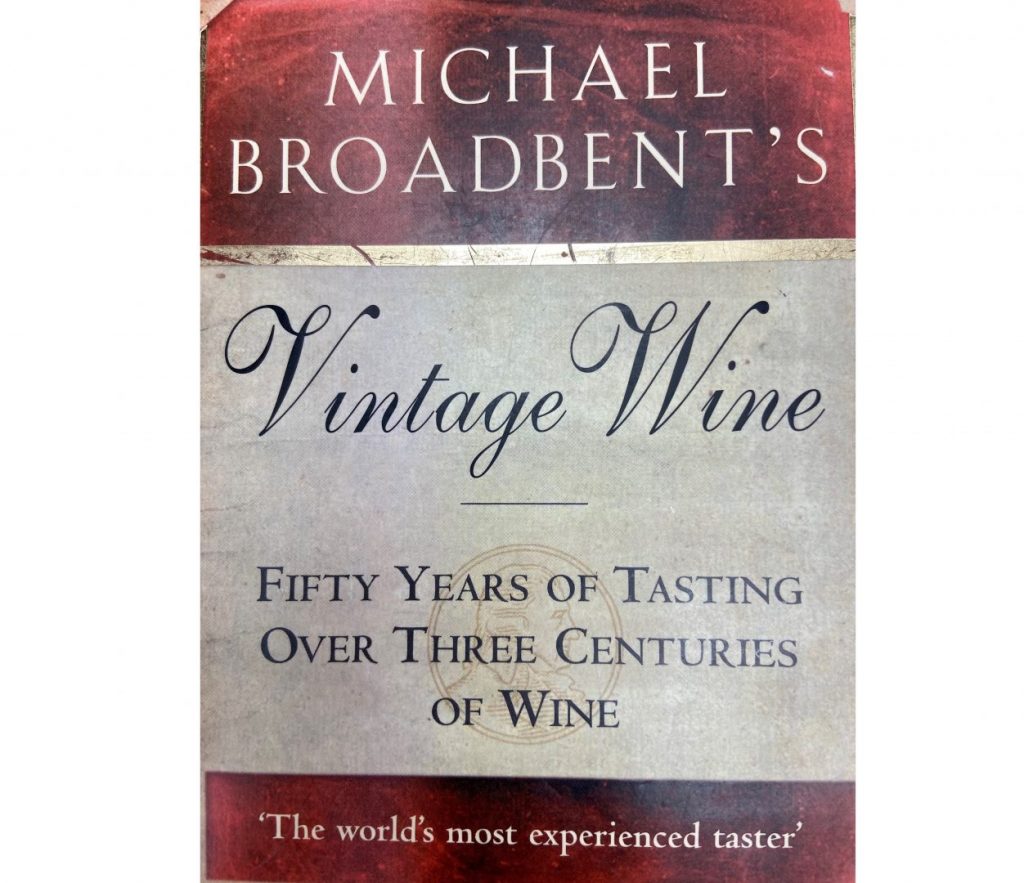 From one celebrated wine enthusiast and authority to another. Oz Clarke developed his love of wine whilst studying theology and psychology at Oxford University, discovering that not only did he have an excellent palate, he had an excellent memory, making him a formidable blind-taster. I was lucky enough to confirm the veracity of an anecdote about his prowess when I bumped into him at a wine tasting a few years ago (he was delighted the story was still doing the rounds!): trying to catch him out, friends mixed two vintages of legendary Hermitage, Jaboulet’s La Chapelle in a glass, before presenting him with the wine to assess. After some confused deliberation, he announced, ‘well I’m pretty sure it’s La Chapelle, but I just can’t make up my mind if it’s the ’82 or the ’83…’

Unsurprisingly Oz became captain of the university’s wine-tasting team, before taking up a career as an actor (look out for him in Superman I and II!), before coming to UK public consciousness in the BBC TVs series Food & Drink, which ran between 1982 to 2002, in which he vied with co-host Jilly Goolden in the use of flowery adjectives as they helped raise public interest in the country as wine sales boomed.

Like Michael Broadbent, Oz is a studious note taker at tastings, and has a wonderful ability to convey his passion for the grape. He has countless books to his name, but the one that I still leaf through fondly to this day is 1991’s New Classic Wines. A passionate advocate of wines from traditional ‘classic’ regions, he was an equally notable proponent of the ‘New World’ wines that changed the vinous landscape in the 1990s (he once turned up at a tasting with a tee shirt sporting the legend ‘Fruit! Fruit! Fruit!, which could only be read as a mission statement), and this book has around 70 producer profiles who lead that charge, most of whom are revered to this day. 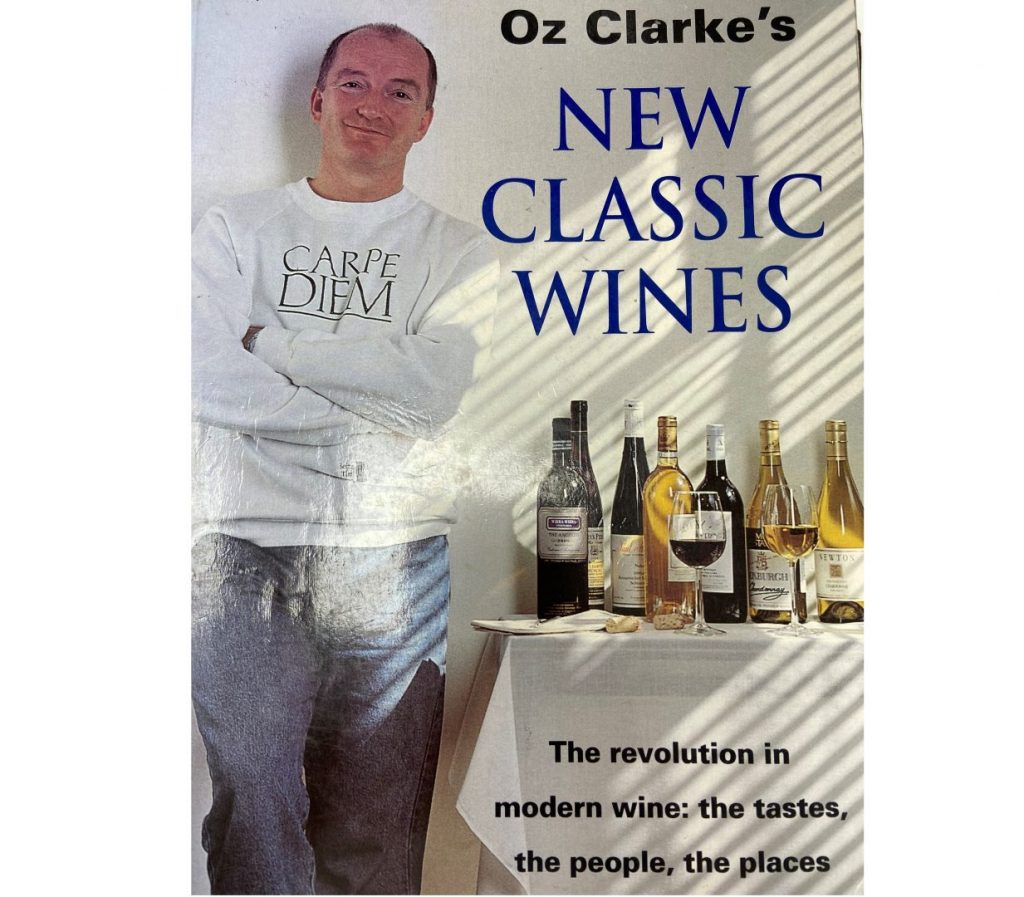 I once asked the wonderful and late, lamented California winemaker, Jim Clendenen of Au Bon Climat to autograph his profile page, which carried a picture of him 20 years ago, sporting a fabulous blonde mullet, tasting wine in his cellar. Jim wrote ‘GREAT WINE’ on one of the barrels pictured nearby, and ‘Oz is a f***** genius’. Indeed.

Whisky lovers will be familiar with wine author Andrew Jefford’s Peat Smoke and Spirit: a Portrait of Islay and its Whiskies (reissued in 2019 with the infinitely more boring, if pragmatic title, Whisky Island), but for wine fans, 2002’s The New France is his masterpiece.

Most drinks books, not unreasonably, rely on a degree of enthusiasm and passion about the subject at hand to be of interest to a potential reader, but such is the brilliance of Jefford’s writing, that one really could simply read it for the prose and exquisite use of language.

Jefford’s stated aim with the book (which covers France’s fourteen wine regions, investigating the personalities and producers behind the resurgence of the French wine industry) was ‘the championing of individuals rather than multi-nationals, of families rather than corporate shareholders, of agriculture rather than industry, of authenticity of origin rather than marketing stratagems,’ and one comes away armed with a wealth of knowledge and genuine understanding about them, having been schooled by one of the wine industry’s deep thinkers.

Each region is given a profile, carrying mini side-bars relating to notable growers and personalities, with ‘The Adventure Of The Land’ sections going into thorough detail relating to that most French of concepts – and most crucial to the success of its wines – terroir, with a ‘flak’ section dealing with issues and sometimes controversies local to the region. The ‘People’ section provides producer profiles of the main players, giving Jefford the opportunity to flex his writing muscles and wax lyrical.