A historic collection of miniatures purchased by one seller at a Brighton auction in 1979 has come up for auction for the first time in 40 years. The collection is mainly comprised of blended Scotch whiskies and single malts bottled in the first half of the 20th century.

It wasn’t until the collector contacted Whisky.Auction to ask if some of his minis would be of interest to bidders that he realised how rare and valuable they were, ‘I thought they were worth something but had no idea’ he said.

He added: ‘I started collecting in 1979. I worked with a friend and we were talking about hobbies, he said that he collected Scotch Whisky miniatures. I thought that was something different so I had a go and was hooked. I was lucky to find an auction that had a collection. I didn’t know what was in it so I bid £100 and they phoned me the next day to say I had won it.’

The whiskies in the collection include brands that have been consumed and enjoyed for generations. Each one has its own miniature and enchanting story. Every bidder has the opportunity to own and taste these extraordinary rarities.

Here we take a closer look at a few highlights from this special collection and the fascinating history behind them.

Many of us have heard the name Stromness. Few of us have ever seen a bottle from this long-closed distillery and even fewer have tasted this precious juice. Imagine our delight when in-amongst the collection appeared a bottle of Old Orkney ‘0.0.’ Real Liqueur Whisky, made in Scotland by McConnell’s Distillery Limited, proprietors of Stromness Distillery, likely bottled sometime in the 1920s or 1930s.

Described by Alfred Barnard as ‘the most remote Distillery in the kingdom‘, Stromness distillery, located on Orkney, was founded in 1817 and sold its whisky under the name ‘Man O’ Hoy’, after one of the island’s landmarks. It was renamed  ‘Old Orkney’ when the distillery was reopened in 1878 by the MacPherson brothers after a period of closure. In the early 1900s, Stromness was acquired by J & J McConnell Ltd. (McConnell’s Distillery Limited) who operated the distillery until economic conditions forced its closure in 1928. From there it was owned for a time by Booths Distilleries before sadly being demolished in the 1940s.

This miniature is exceptionally rare and scarcely appears at auction. We expect widespread interest in this one, as serious whisky collectors and drinkers battle to get their hands on this extraordinary bottle. The seller had no idea of its true value. Remarkable.

Laphroaig is a more well-known and frequently seen name, but how many of us can honestly say that we have tasted or even seen Laphroaig from the 1950s?

The fill level is excellent on this miniature bottle of Laphroaig Old Scotch Whisky bottled in the 1950s(!) at 20 under proof (80 proof), sealed with a Kork-N-Seal screwcap with capsule.

About the time when this Laphroaig was bottled, distillery owner Ian Hunter left the distillery to his secretary Elizabeth ‘Bessie’ Williamson when he died in 1954 and she became the only woman to own and run a Scottish distillery in the 20th century. By the time Bessie retired in 1972, the distillery was owned by American firm Schenley and the number of stills had increased to seven.

Expect this Laphroaig from the 1950s to be salty, sweet, herbaceous and medicinal.

Might this White Horse contain Malt Mill? The short answer is yes. This miniature from 1921 was bottled by Mackie & Co. or to give it its full name, Mackie & Company Distillers Ltd., Lagavulin Distillery, Isle of Islay, and Glenlivet District.

The company was established by Peter Mackie in 1883 but has links back to 1801 when Mackie had worked for his uncle James Logan of J.Logan Mackie & Co. (Distillers) Glasgow, who had purchased the Lagavulin distillery. Mackie himself built the Malt Mill distillery in 1908 after a disagreement with the then owners of Laphroaig. Malt Mill was mainly used as a component in blends, namely Mackie’s, but also White Horse.

White Horse was created by Mackie to crack the international market for blended whisky. Marketing campaigns saw the whisky establish its reputation and its founder knighted to became Sir Peter Mackie. Upon his death in 1924, the company was renamed White Horse Distillers Ltd. after its best-selling product. The company, including both the Lagavulin and Malt Mill distilleries, was taken over by Distillers Company Limited (DCL) in 1927.

No one can be 100% sure of its contents, but one could safely assume it would include some Lagavulin and who knows, perhaps a little Malt Mill too. 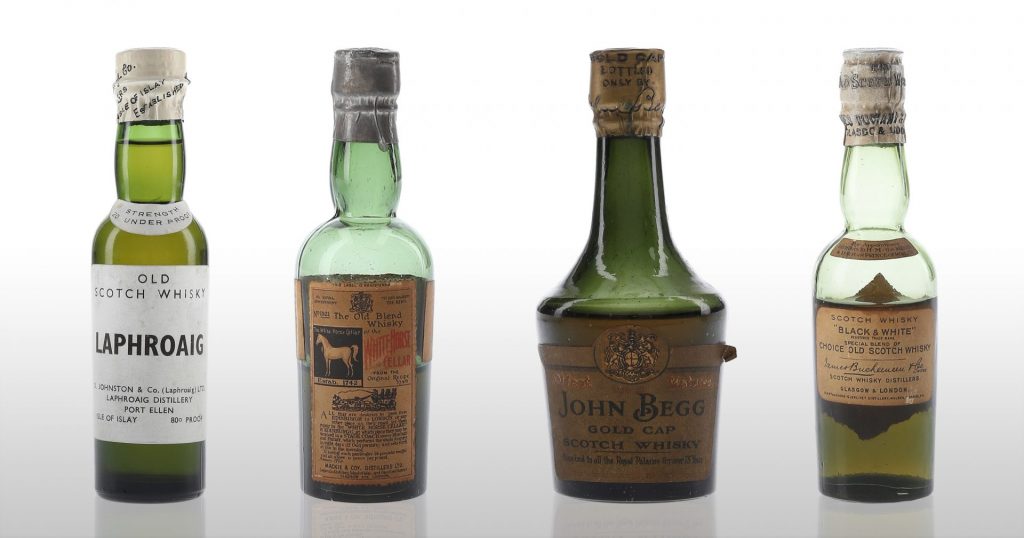 I wrote a little about the history behind this famous blend in a previous blog post, but the fascinating thing about this bottle is what’s written on the label. This bottle carries a royal warrant by appointment to HM The King and HRH The Prince of Wales which dates it to c.1930s, shortly after the company had been swallowed up by DCL.

The back label reads: ‘Black & White – Select Committee – At the British and Foreign Spirits Select Committee, appointed by the Government in 1890 under the presidency of Lord (then Sir Lyon) Playfair, Dr Bell, CB, the Chief Analytical Chemist of the Government spoke in terms of high appreciation of a sample of our Scotch Whisky, saying “From the general fine character of the sample there is reason to believe that it has been warehoused for many years etc. “Fifteen Years Later the Medical Magazine (October 1905) says “The statement made by Dr. Bell is as true to-day as it was then.”‘.

This proclamation by Dr Bell is praise indeed and provides a snapshot of the era in which so many of these lovely old bottles date back to.

The eagle-eyed of those among you may also have spotted at the bottom of the front label the words ‘Glentauchers-Glenlivet Distillery, Mulben, Speyside, M B’, which perhaps is a clue as to at least one of the malts which made up this blend.

John Begg was the man who built Royal Lochnagar Distillery in Deeside in 1845 and the distillery’s malt went into this blend. John Begg Ltd. moved its blending and bottling operation to Glasgow in 1906 and in 1916 the company and the Lochnagar distillery were acquired by John Dewar & Sons. Soon after, it came under the control of DCL, which seems to be a running theme amongst many of these old distilleries and blending companies. The label reads ‘Supplied to all the Royal Palaces for over 75 years’. Under the royal warrant it states: ‘By Appointment Since 1848’.

The location of the distillery, nestled in the valley overlooked by the mighty summit of Lochnagar itself, just next door to Balmoral in Deeside, Aberdeenshire, is one I know well and serves as an incredible backdrop to a very small and rather quaint little distillery. It’s easy to see why people fell in love with this old blend as both the distillery and the stories which surround it are both enchanting and inspiring.

Old Lochnagar whisky tends to have an oily ‘Highland’ style so expect this miniature to still have some oomph, even after all these years.

This miniature was bottled by B Grant & Co. Ltd, which later became Grant’s of St. James, the wines and spirits arm of Ind Coope & Co., which itself went through various names and mergers before finally renaming as Allied Breweries in 1963. It was bought by Carlsberg over two stages in the 1990s. Nothing to do then with William Grant’s.

The wonderful label depicts a typical Scottish Highland scene. A backdrop of heather covered hilltops and in the foreground, the banks of the majestic River Dee, twisting its way through the pine trees towards a large and rather striking castle. The castle in question is that of Invercauld, just outside of Braemar, Aberdeenshire, built for Clan Farquharson in the 16th century. I have seen the castle myself many times and I think it’s depicted rather well.

The current Invercauld estate spans an area of approximately 43,600 hectares and borders that of Balmoral in Royal Deeside, one of the residences of the British Royal Family since 1852, when the estate was purchased by Prince Albert, husband of Queen Victoria.

Labels like this aren’t seen very often today as it seems the notion of including pretty pictures is somewhat outdated. 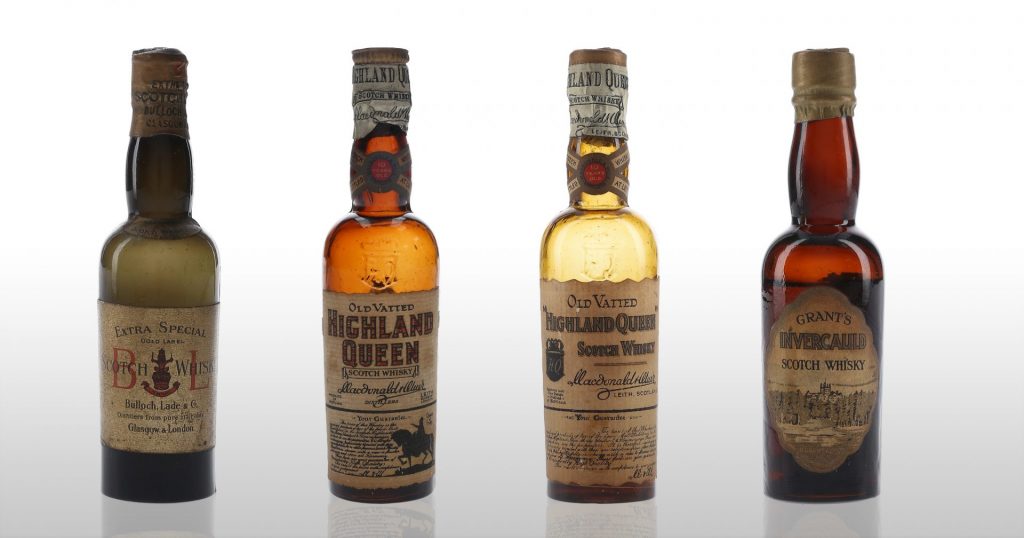 Macdonald & Muir was established in 1893 by Roderick Macdonald and Alexander Muir. It began operating the Glenmorangie distillery that same year, eventually acquiring it in 1918. Shortly afterwards, it acquired the Glen Moray distillery in Elgin which was closed at the time during the slump in the early 20th century, promptly reopening it again in 1923.

Working out of Queen’s Dock, Leith, the company named its flagship blend Highland Queen, as Mary Queen of Scots had landed at Leith Harbour when she returned to Scotland from France in 1561. The blend proved popular and was soon sold as far afield as Egypt, Scandinavia, South America and the Far East.

The label of the earlier bottle, from 1927 onward, has the letters ‘H Q’ on the left hand side for ‘Highland Queen’. In the later expression, which dates back to 1932 at its earliest, the words Highland Queen are now adorned in tartan and a smart figure is riding a horse with the words ‘Queen of Scots’, a depiction of Mary herself one would assume (the letters HQ are now on the back of the bottle).

Both labels read ‘Your Guarantee’, under which is written ‘The basis of this Whisky is the matured products of two of the finest Malt Distilleries in the British Highlands. Glen Moray Glenlivet & Glenmorangie Ross-shire of which we are the proprietors.’. So, proof indeed that these old blends do indeed contain malts from both Glen Moray and Glenmorangie distilleries.

Bulloch Lade & Co. was founded in 1830 and became a major whisky blender and distillery owner by the end of the century. The Glasgow based blender was owner of Loch Katrine distillery (formerly Camlachie) and Benmore Distillery, as well as Caol Ila distillery on the Isle of Islay, which it owned from 1880 to 1920 when the company went into voluntary liquidation. Bulloch Lade became part of DCL in 1927, a purchase which included many of the Bulloch Lade brands and almost 1.5 million gallons of maturing whisky.

Bulloch Lade used a proportion of Caol Ila as part of the blend. This one was bottled circa 1920s to 1930s, possibly before the DCL takeover. It is possible that whiskies from Loch Katrine and Benmore were used too.

The Loch Katrine distillery (not to be confused with the Loch Katrine-Adelphi distillery) changed names multiple times over its short life. It eventually closed in 1920. Bulloch Lade was also associated with blenders Wright & Greig, which acquired the Dallasmore (renamed Dallas Dhu) distillery for a short period. This was all absorbed into DCL when Bulloch Lade went into liquidation.

Bulloch Lade & Co continued to operate as a subsidiary of DCL until it was finally dissolved in 2007. Quite a journey.