For whisky adventurers the next frontier, the unexplored extreme limit of experience, is that moment of discovering a previously unknown privately bottled whisky and wondering if that new found treasure might contain priceless gold or simply a perfectly serviceable pyrite.

Unheralded, unsung, often anonymous, private bottlers are the whisky heroes with walk-on parts in the story of single malt Scotch. Let me tell you about two such heroes, George and Barbara, and their excellent adventure.

It was in 1962 while George was studying to become a post graduate Civil Engineer at Birmingham University that he met his wife to be, Barbara. They married in 1965 and George eventually retrained in finance, which led them to spend the next decades living in Spain, Nigeria and all over the USA. They eventually returned to the UK 30 years later when George retired in 1993.

George was a man who enjoyed the good things in life, wine, cigars, sailing, but most importantly to us, he enjoyed Scotch whisky.

It was while the couple were living in Nigeria in the 1980s that they joined a wine club where they made monthly payments to build up a wine cellar. In 1995 the club offered them the chance to buy a cask of single malt Scotch whisky. Barbara decided this would be the perfect gift for her husband’s 60th birthday and secretly bought him a cask of Springbank.

Naturally George was delighted with the gift and he began taking samples on his regular visits up to Scotland to visit his cask. Barbara said ‘I do believe it is of very good quality, and it has been carefully stored.’

She particularly remembers one trip to Campbeltown ‘with George shinning up like a lumberjack to locate his cask high in the rafters…he was beyond happy!’

Barbara remembers their shared hobby so fondly ‘My late husband derived endless pleasure over the years getting samplings and deciding when to bottle the contents of the cask.’

In the photo, George is pictured enjoying a Havana cigar a few Christmases ago ‘and there would definitely have been a bottle of Springbank at his feet!’ said Barbara.

Sadly, George died on 19 March 2020 at the age of 83. Now there’s a chance for you to share in the excellent adventure he enjoyed with Barbara.

Over the next few auctions we’ll be releasing George’s last remaining bottles from his cask of Springbank distilled in 1996. 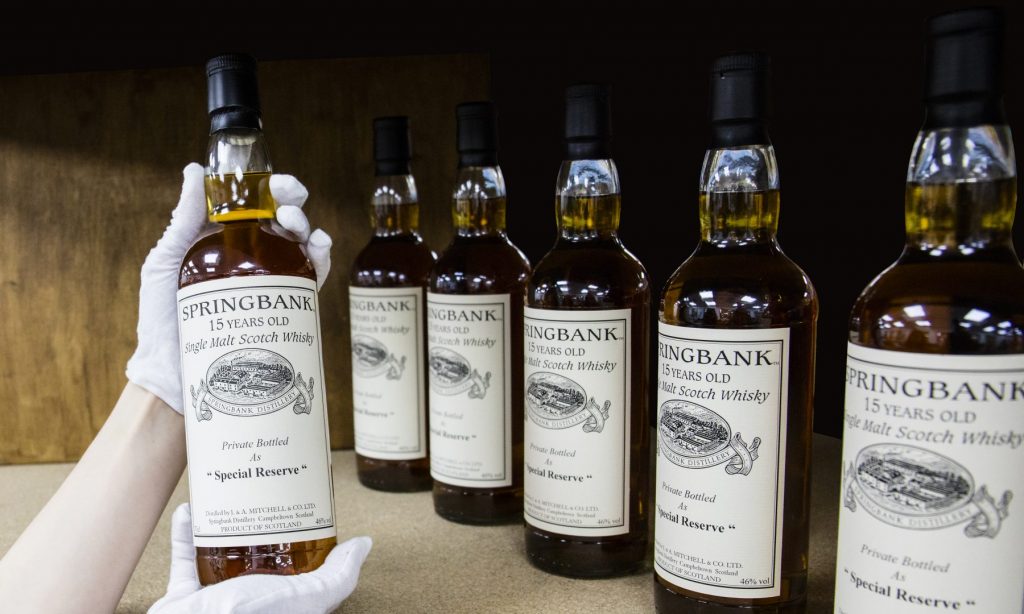